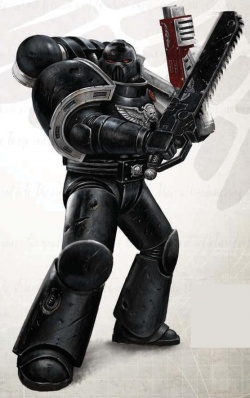 The Deathwatch Black Shields are members of the Adeptus Astartes that are attached to the Deathwatch, the Chamber-Militant of the Ordo Xenos of the Inquisition.[1a]

Typically, Space Marines attached to the Deathwatch are members assigned from their respective Chapters and wear the distinctive chapter icon with pride on their shoulder guards. However, there are a number who hold no such sacred symbol and the place where it is supposed to reside is left black. Instead, the skull faced icon of the Deathwatch remains on the marine's left shoulder guard with its silver colorings marking their allegiance to the Chamber-Militant. These Black Shields shun the company of their fellow Astartes and only assemble with their Battle-Brothers on the field of battle. Their position is a unique one within the Deathwatch and some even regard their presence as being an ill-omen. However, the Deathwatch is eager to accept an Astartes into their ranks, as a trained Space Marine is considered too valuable a weapon to be squandered. Thus they find duties for those that have been rejected by their masters.[1a]

The reasoning behind this practice is that these warriors are Space Marines without a Chapter and are individuals that have severed themselves from the brotherhood of the Astartes. Such individuals often have their heraldry removed from their shoulder guard and petition the Watch Commander of the Deathwatch for admittance into that sacred order. Their reasons for entry are varied; some join because their Chapter has been destroyed and thus the lone survivor decides to dedicate his final actions in the service to the Deathwatch as an act of pious humility. Another, much darker origin, arises from situations where the respective warrior's Battle-Brothers turned away from the grace of the Emperor. The Black Shield decides to leave his traitorous brethren behind in order to expunge their sin from his being. By tradition, these Astartes are never questioned on their origin, every trace of their past is obliterated by the removal of their Chapter icon. During their first encounter with the Watch Commander, little is known of what is discussed. Most of it kept secret between the two, and supplicants normally supply only their name and their degree of basic training. By right, a Watch Commander is entitled to refuse entry to the warrior, although this is rarely done.[1a]

Once within the Deathwatch, these Black Shields commit themselves to a life of atonement where they guard the outer reaches of the Imperium from many diverse threats. Sometimes, their life long service can even award them the honour of being entombed within the Watch Fortress. Their final action allowing them to reforge the bonds of brotherhood that they had once severed. Normally, Black Shields are considered a rarity with only a few ever being seen in the life of a Watch Commander. Each Astartes that takes such a mantle has a different reason for walking down this path and their fellows will often speculate on this matter. The only trait that is the hallmark of all Black Shields is a fierce determination to right a wrong in their past by dedicating themselves to the Deathwatch. They often express this by a penitent regime of prayers and self castigation between training sessions in order to better prepare themselves for the challenges ahead. Black Shields whose Chapters still exist are expunged from their Chapter records and forever forgotten. Such a practice is used by some Astartes Chapters as a form of permanent exile for brethren who cannot atone for their misdeeds in any other way.[1a]

On the battlefield, a Black Shield fights without a care for personal injury and is single minded in achieving the objective of the Kill-team. They are noted for being reckless, yet at the same time self sacrificing, since they show no hesitation or fear when putting themselves in the path of danger. This means they make ideal point-men or forward troops which can be used to bait an enemy or draw their foe's fire whilst his comrades terminate the target. Black Shields care little for personal glory and will not engage in actions that would jeopardize the safety of those around him. However, they are always ready to give their lives in battle as they believe themselves already dead and that their only worth their service to the Deathwatch. They unquestionably accept all the hardships placed on them, which includes assignments that their comrades feel are not glorious enough. As such, they offer no complaint whether stationed at the forefront of a Kill-team or standing alone on guard duty at a Watch Station. However, their dedication and self-sacrifice can sometimes lead to being awarded positions ranging from Deathwatch Chaplains, Watch Captains and even rarely Watch Commanders.[1a]