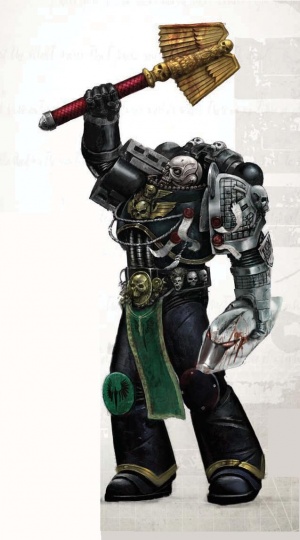 Deathwatch Chaplains act in a similar role to those of other chapters by acting as the spiritual leaders of battle-brothers undertaking their vigil with the Deathwatch. However, the challenges facing a Deathwatch Chaplain are unique. The rigours of serving in the Deathwatch can be sorely vexing for Space Marines accustomed to the rigidly ordered life of their own Chapters. Long periods of isolation and privation await them, only punctuated by chaotic, often-desperate combat against wildly diverse enemies. The need to work alongside battle-brothers of other chapters in the Deathwatch can be challenging in itself, particularly among those from chapters with long-running rivalries and past antagonisms. Most of all, battle-brothers in the Deathwatch are exposed to horrible truths about the true threat of the xenos lurking just beyond the circle of the Astronomican. They will witness sights that can shake their faith to its very foundations and yet are often asked only to watch and report back on what they have seen.[1]

The corrosive poison of seeming impotence and frustration can drive Space Marines to insane acts of self-sacrifice in a hopeless effort to overcome star-spanning evils. A Deathwatch Chaplain must always stand ready to renew a battle-brother’s devotion when he falters, and to remind him of his duty and his vows when hope seems lost. On the most difficult missions a Deathwatch Chaplain will lead his battle-brothers personally to ensure that their fervour is directed squarely towards victory even if it comes at the cost of the sacrifice of the entire Kill-team.[1]

The fierce dedication of a Chaplain to his own chapter usually makes them unsuitable to become Deathwatch Chaplains, although examples of such broad-minded individuals do exist. More typically battle-brothers find their calling through apprenticeship to an existing Deathwatch Chaplain that has noted their unflagging zeal in pursuit of the alien. Once a Deathwatch Chaplain takes his vows he will seldom see his old chapter again, instead giving himself entirely to the Long Vigil and the duties of the Deathwatch.[1]

A Deathwatch Chaplain must study extensively during his training. He must know the beliefs and values of a thousand different chapters and their sometimes contradictory legends of the Primarchs by heart. A Deathwatch Chaplain must become not only a righteous warrior but also a scholar of the Primarchs and of chapter histories originating in the very birth of the Imperium. Thus, when a Deathwatch battle-brother stands at the brink of despair or impotent rage, the Chaplain will know the right liturgies and catechisms to speak, and which chapter heroes or legendary battles of the past to cite that will inspire the warriors of the present.[1]

Watch Fortresses include a central shrine called a Reclusiam where prayer and worship is conducted. The Reclusiam is greatly revered as a sacred place and contains precious relics of Deathwatch history: fragments of armour from fallen champions of the Watch, blessed weaponry that has drunk deep of xenos blood in millennia past, the captured banners and shattered icons of defeated foes. Here the sonorous voices of the battle-brothers are raised in honour of the Primarchs and the Emperor, and the catechisms of hate and repugnance are spoken. Among these relics of past glory the Deathwatch Chaplains proselytize on the sacred duties and the virtues of service to the greater glory of the Emperor. But Chaplains also teach that the time for prayers and worship is not only within the ancient stones of the Reclusiam but also on the battlefield. Here, where the roar of bolters is the loudest and where the fires of righteous fury burn the brightest, Space Marines can exercise their most sacred duty and give praise to the Emperor with the slaughter of His enemies.[1]

In addition to their traditional garb of black Power Armour and skull-shaped helmet, Deathwatch Chaplains also commonly add many xenos trophies: strips of tanned alien hide, strings of bones, skulls or shrunken heads inscribed with liturgies of hate and remembrance. Their passion for killing aliens is without peer and each trophy will mark a noteworthy foe or memorable battle. A Deathwatch Chaplain is a deep well of tried and trusted techniques for slaying xenos, not only from personal experience but from the vast tracts of Chapter legend and lore that they can draw upon.[1] 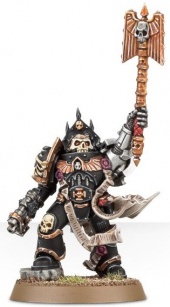