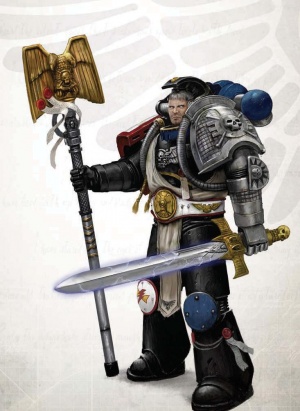 Deathwatch Epistolaries are a class of Librarian used by the Deathwatch

Space Marine Chapters rigorously screen all their potential recruits for signs of mutation. One of the most important roles of Apothecaries is to test neophytes during their selection and the implantation of the organs that turn them into a Space Marine. The slightest physical deviation is grounds for termination, but the rare instances of psychic mutation mark a candidate as worthy of special attention.[1]

The Chapter’s Librarium is charged with the responsibility of monitoring and developing psychically active recruits. Psychic talent is both a great gift and terrible curse. Only a handful of those with talents survive their training and indoctrination. They must contend not only with the rigours undergone by all Space Marines but also a thousand invisible foes ready to feast on their soul. Every moment is spent walking at the edge of precipice where a single slip will send the recruit tumbling into damnation. A moment’s weakness can be all a daemon needs to slip in and possess a nascent psyker. The toughened flesh of a Space Marine makes him a highly desirable host, as it is capable of containing the ravening energies of a daemon for an extended time. Some Librarians encounter warp entities during their initiation that follow them for the rest of their lives like jackals, always alert for a chance to strike when the Librarian’s defences are down.[1]

Monstrous, warp-based parasites are also drawn to the bright light of a vulnerable soul until the recruit learns enough to mask their presence. Some, like the insectile Psychneuein, use the psyker’s mind as a place to breed. Others, such as the dreaded Dominators, take over their victim’s own power and twist it to their ends with horrifying results. The focus and self discipline necessary to overcome such terrors must be learned quickly or not at all as any member of the Librarium will not survive long unless they can protect themselves. Among psykers, as among the other recruits, the weak and vulnerable are mercilessly culled. To leave them alive would be to put everyone around them in the most dire peril imaginable. Should a recruit survive the many trials before him, he joins a small and very select band even among the elite Space Marines. The indomitable strength of will required to hold the horrors of the warp at bay and wield its power marks out a truly exceptional warrior amongst the Emperor’s Finest and those initiated into the Librarium are destined to win great renown. In most Chapters Librarians are keepers of the Chapter’s lore and its deepest mysteries, acting as advisors and visionaries to its Master and his Captains in any decision of import. The members of a Chapter’s Librarium, from the lowest ranked to the very highest, have skills as battlefield psykers mated to fearsome personal ability that make them resources of incomparable value to the Chapter.[1]

Increasing duties within the Chapter often constrain higher ranking individuals from taking extended Vigils with the Deathwatch. Consequently those at the lowest rank of the Librarium, that of Lexicanium, most commonly complete Vigils. Nonetheless, it is rare but not unknown for individuals to unlock powers through their experiences during their Vigil that raise them to the rank of Codicier or even Epistolary while still in the watch. Others return to the Deathwatch later in their lives in response to a personal request from the Watch Commander, to finish some matter first unearthed in their formative years or simply because they have come to believe the threat of the alien deserves special attention. Such renowned individuals hold a high rank within the Deathwatch and are liable to be consulted on all major undertakings. Their powers of precognition offer an opportunity to rend the veil on potential outcomes and they have ways to uncover hidden knowledge that would be unreachable by the other means.[1]

As part of a Kill-team an Epistolary wields devastating powers capable of incinerating hordes of enemies and entire nests of aliens. He bestrides the battlefield with fire and wielding lightning with the power of an angry god. Few foes will stand before the coming of an Epistolary as their minds fill with terror and webs of confusion. Those few that can resist the psychic onslaught must face the terrible fury of the Epistolary’s force weapon, a blade blazing with the white-hot certainty of his own will. The most important call made for a Deathwatch Epistolary is to take the field against xenos psykers.[1]

Many alien species boast warp-dabblers and sorcerers of varying talent that make pacts and sell themselves willingly to the Ruinous Powers. Others, like the Eldar, have their own esoteric methods to shape the warp to their will. Yet others have innate psychic powers that can render them immune to conventional weaponry, dominate or stupefy Space Marines. All of these and more represent dire threats to an unprepared Kill-team without psyker support. A Librarian can warn of such perils before they are encountered, or at least in time to act against them decisively with targeted attacks.[1]

An Epistolary can overcome the most potent alien psyker coven or protect his Battle-Brothers from an overwhelming psychic miasma. With an Epistolary present, a battle is fought on two planes, both the physical and psychic, and Librarians are specially equipped for this task. Their powers are channelled through the conductive wiring of a psychic hood, a piece of wargear linked directly into the Librarian’s brain. The psychic hood extends the wearer’s consciousness so that he can “feel” manipulation of the warp and counteract it. Augmetic crystals in the psychic hood help him to focus and enhance his strength in the battle of wills that follows.[1]

With their psychic defences stripped away, aliens easily fall prey to conventional kill-team tactics. Time spent in the Deathwatch offers a Librarian a unique opportunity to learn about alien psykers and to study their methods for manipulating the warp. A Deathwatch Epistolary is deeply knowledgeable about such matters, a veteran of many encounters with not just xenos creatures but their artefacts and structures too. The reading of xenos minds, while distasteful, is acknowledged as an unpleasant art form in its own right that can expose the murky web of motivations and alien thought processes to full examination. Psychometry, the art of object reading, opens insights into the operation and purpose of things made by alien hands (or their equivalent) even long past their extinction. On many occasions looking at past relics has prevented future disasters by correctly predicting the resurgence of an alien threat at a specific site or by revealing a key weakness that can be used to bring about their doom.[1]

Such prolonged exposure to xenos also places particularly stringent demands on an Epistolary. The gradual insinuation of alien thoughts and concepts into the Librarian’s mind is an ever-present peril that must be guarded against. Every piece of knowledge won can bring with it the seeds of potential destruction in the form of memetic trap or a psychic poison. Any psychic contact with an alien mind, living or dead, can bring with it a subtle corruption, a tiny chink in the Epistolary’s mental armour that opens him to further attack. Against these perils the Epistolary must match the power of his will and he must maintain a blinkered mind always closed to new concepts and alien designs. He must master his own mind and know it always to be his own, uninfluenced and pure to the end.[1]

Alien Minds and Bond of Brotherhood are two psychic powers exclusive to the Deathwatch Epistolary.[1]