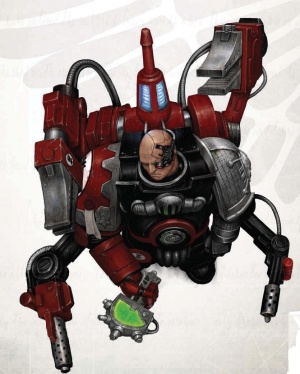 A Techmarine who wins sufficient renown may eventually be raised to the honoured rank of Forge Master.

A Forge Master oversees the manufacture and maintenance of Deathwatch armaments of all kinds in a particular Watch Fortress, from Kraken bolt rounds to planet-destroying Kill-ships. A Forge Master must also deal with all manner of xenotech captured by Kill-teams on their missions, studying, categorizing and determining its potential value or threat. A Forge Master is commonly a close confidant of the Watch Commander and acts as central cog to the functioning of the whole Watch Fortress and its associated Kill-teams.[1]

To achieve such heights, the Techmarine must have demonstrated tremendous skill in the arts of the forge as well as the arts of war. Not all Techmarines show a great aptitude with alien technology; indeed, many find it repugnant in the extreme. This is seen as no barrier to them becoming a Forge Master in its own right; many Forge Masters are trenchant conservatives that hate all things xenos. However, a Forge Master must grasp the tainted paths of alien technology on some level so that they can ultimately dispose of malevolence successfully.[1]

Examples of xenotech might include anything from individual artefacts that can be returned to the Watch Fortress to monumental engines that must be examined in situ on some alien world or ship. By working closely with Inquisitorial representatives of the Ordo Xenos, it is the Forge Master's lot to pass judgement on the artefacts he surveys.[1]

He must decide whether some element of the alien science he sees may be blessed by the Omnissiah despite its unfamiliar guise, or whether the foul taint of the xenos is so perniciously woven into an artefact's very fabric that it must be destroyed. The slow, often painstaking process of examination can take years of effort to determine the fate of a single artefact and its less than-certain results can be the subject of great argument between individual Forge Masters. Over the millennia several pieces of "rediscovered" technology derived from the study of xenotech have been incorporated into Deathwatch wargear and even into the munitions of the Imperium as a whole. However, some Forge Masters always remain sceptical and will only ever grudgingly accept any form of xenotech into their armouries. More radical Forge Masters are prepared to exploit new ideas without waiting for the results of a full investigation, incorporating xenotech into their own creations with little concern for the fears of others.[1]

Each Watch Fortress incorporates extensive manufactoria for the production of weapons and armour. Within sweltering, flame-lit halls a lone Forge Master controls potentially hundreds of mono-task servitors and artisan savants as they hammer relentlessly, shaping new weapons of war. Monstrous crucibles of molten metal swing silently overhead, ready to tip their glowing contents into moulds and formers. Sparks fly from electro-welders and grindstones as the work continues without cease. Not all Forge masters are bound to a single Fortress, and some travel endlessly between Watch Fortresses and stations dispensing their knowledge, learning what they can from their fellows and assisting Kill-teams in the field.[1]

Whether in a Watch Fortress or out on a mission, the Forge Master’s position is one of the gravest responsibility. Kill-teams rely on the quality of the Forge Master’s work in environments where a single dud bolt round or a faulty vox receiver can bring disaster. [1]

The maintenance and supplication of machine-spirits is a matter of the greatest import and the Forge Master maintains records of every piece of equipment under his charge, including the Techmarines assigned to maintain it and a history of past rituals undertaken to keep it functional.[1]

The greatest joy of a Forge Master is in the crafting of magnificent armour and weapons for the Deathwatch. While servitors can wield hammers and stoke furnaces, and Techmarines can attend to the maintenance of guns and ships, it takes the touch of a true master of the machine cult to build something anew.[1]

The chain blades made by a Forge Master will cleave through the toughest alien flesh and the unquenchable fires of their plasma weapons burn forever hot and true. The most famous Forge Masters are often sought out by the greatest heroes of the Deathwatch, who desire a weapon worthy to carve a legend.[1]