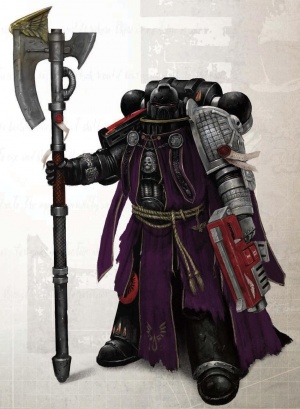 These Space Marines are mostly seen on Watch Fortresses and stand watch over forbidden sites where they barred entry to such locations from their Battle-Brothers as well as guarded captured Xenos prisoners. Their duty is held to such heights that even Inquisitors are unable to pass a Keeper without authorization from the Watch Commander. This is because they fulfilled a holy duty to guard sacred or profane objects that fell into the care of the Deathwatch. Amongst the Chapters, this position is normally undertaken by either Librarians, Techmarines or Chaplains but the small number of such posts within the ranks of the Deathwatch meant that they are too strained to be entrusted with such duties. Thus, the burden of this position is given to Battle-Brothers who had served in decades long watch and given the important tasks of the Chamber-Militant ranging from guarding Xenos prisoners to escorting a Kill-team onboard a starship. Certain regions required the deployment of a permanent detachment of the Deathwatch which meant the selection process of Keepers is crucial as they are required to stand watch for decades long vigil at the edge of madness. Among the most highly trusted of all positions given to Keepers is to serve as host and guardian of either Imperial or alien doomsday weapons that are locked away in Deathwatch vaults. These duties did not restrict them from field duty as they can also be detached and sent with a Kill-team. The lore and secrets available to them can be crucial in helping capture a xenos specimen making them valuable comrades to their Battle-Brothers.[1]

Those Astartes chosen for elevation to this position are required to hold an unblemished record of service to the Deathwatch. Following acceptance, the supplicant faced a lengthy period of prayers and fasting before presenting themselves to the Watch Commander and his most trusted advisors. During this moment, the Space Marine is questioned in a long and gruelling manner with psychic probes from Librarians being used to test the potential Keepers loyalty. Temptations are provided at every opportunity until the Watch Commander is completely assured that the supplicat is completely dedicated in every fiber of his being to the Emperor and the Deathwatch. Not all, however, passed this test with some being destroyed and even succumbing to madness in the process. In some cases, the questioning reveals deep flaws in the supplicant that are destroyed before they can spread to others in the Deathwatch. Among some, no flaws are shown but the Space Marine demonstrates a lack of determination that is needed for the role. But once convinced of their loyalty, a Watch Commander ascends the Astartes to the post of Keeper.[1]

The initiation ceremony involves undertaking terrible and binding oaths where the newly appointed Keeper placed the protection of the Deathwatch's secret first and foremost. After this moment, the Watch Commander locks a vambrace on the right arm of the new recruit known as the Clavis which not only symbolically but practically binds him to his new duties. This device being a relic of the Dark Age of Technology is linked to his nervous system and vital signs which meant it cannot be used by another being and even deactivates when its wearer is no more. It can only be reactivated by the correct codes given by a Forge Master. The use of a Clavis allows a Keeper to open the many locks and shield barriers in Deathwatch facilities or control the auto-defences or even activate a vessels command chapel and stir its Machine spirit. When attached to a Kill-team, the vambraces of the Clavis are detached and left in the care of the Forge Master until the Keepers return. Keepers are firstly veteran warriors with many long years of service that marked their records. Typically, onboard the Watch Fortresses, they are equipped with ceremonial weapons and armour in order to highlight their status to others. These included powerful glaives, double-bladed chain blades or even ancient las-lances. Their robes held embroidery that covered their armour except for their helm and shoulder guards. Their hallowed power armour is amongst the earliest of their kind and held the Imperial Eagle or Deathwatch icon which included sigils in High Gothic.[1]

Their important role within the Deathwatch and years of service means that a Keeper is quite capable of giving counsel to their comrades. In addition to their normal responsibilities, they are charged to conduct the training of their eventual successor as well. This range of duties meant that they ranged from supporting their Battle-Brothers to watching over Deathwatch stations to conducting their militant guard duties to confine as well as control alien prisoners kept for dissection and interrogation. To assist them in this duty, they learn the techniques for pain amplification and restraint from Apothecaries and Inquisitors in order to better dominate their charges. They are also informed of the care and feeding needs of their prisoners in order to ensure that they did not expire quickly. Those Chapters with a history of space combat have their Keepers in charge of Deathwatch rapid-strike vessels where they master their talents in fighting in the void. Such Keepers hold the important task of not only delivering Kill-teams to their objectives but returning with them. In addition, those Astartes of monastic or scholarly talents are often made Keepers where they guard data-crypts and logic engines containing forbidden xenos lore. Though its considered too dangerous to be freely accessed, the duties of a Keeper meant that they are required to study and understand what they are meant to guard.[1]