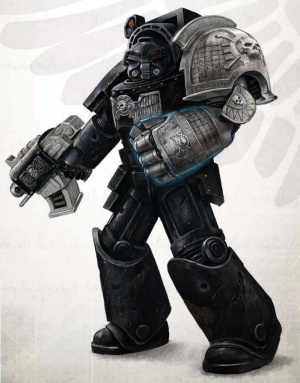 Deathwatch First Company Veterans are the fighting elite of the Deathwatch

The Deathwatch is not formally divided into separate companies as are other Space Marine Chapters. The basic tactical unit of the Kill-team is the only set organization used and individual Kill-teams can often change their composition from mission to mission as ordered by the Watch Captain in command of them. A higher level of organization than this would be cumbersome and pointless with the members of the Deathwatch spread across the galaxy on a thousand unrelated missions. Nonetheless, there are First Company Veterans to be found in the ranks of the Deathwatch, expert warriors that have come to perform their vigil and bring their considerable prowess to the service of the Watch. More rarely a Space Marine will win such renown within the Deathwatch that he is accorded the rank and privileges of a First Company Veteran in recognition for his zeal and purity during his Vigil. When the Battle-Brother returns to his Chapter it is rare for his Chapter Master not to acknowledge this honour, inducting him into the First Company at the first opportunity.[1]

According to the precepts of the Codex Astartes, the First Company of a Space Marine Chapter is by ancient tradition the Veteran Company. It is made up of the most heroic, brave and trusted Battle-Brothers in the entire Chapter, seasoned veterans that have proved their mettle in hundreds of conflicts from squad-level raids to full-blown Crusades. Most of the First Company is made up of Space Marine warriors that have already achieved the rank of Veteran Sergeant in their own company, but exceptional acts of courage can occasionally lead to younger recruits being inducted into the First Company to honour them. Such younglings must be driven indeed to match the deeds of the First Company Veterans, and will have to prove themselves many more times before they become fully accepted into their ranks.[1]

The Chapter Master and his senior officers will carefully consider each candidate and their acts of valour before granting their elevation. The members of the First Company will be entrusted with many precious mysteries hidden from the Chapter’s other Battle-Brothers, and holy artefacts of incomparable value. More than this, the First Company bears the honour of the Chapter before all others and in times of doubt and confusion it is to them the Battle-Brothers will look to for guidance. Chapter legends are littered with examples of a handful of First Company veterans expunging a stain on the Chapter’s honour despite the risks, or selflessly sacrificing themselves in the cause of victory. [1]

The Ultramarines’ First Company, for example, died to the last man defending their homeworld of Macragge in the first Tyrannic war and has only recently regained full strength after centuries of rebuilding.[1]

The Dark Angels’ First Company is known as the Deathwing and still wears bonewhite armour in remembrance of the self-sacrifice of their fellow veterans to safeguard the future of the Chapter long ago.[1]

Every recruit aspires to become part of the First Company one day and competition between them to prove themselves worthy enter its ranks is always fierce. To join the First Company is to become a part of the annals of Chapter's history and uphold the proud traditions of its greatest heroes. Veterans of the First Company are acknowledged as exceptionally skilled and zealous even among other Space Marines, and train relentlessly to hone their skills further with gun and blade. The First Company has the honour of being assigned the hardest missions against the toughest opponents and as such is always the most powerful Company in the Chapter. [1]

In the Deathwatch, as in all other Chapters, First Company Veterans are given access to the finest weapons and armour available: masterfully crafted plasma weaponry and power swords, relic armour of great renown, protective shields and rare grenades. Most notably its members are trained to make use of Tactical Dreadnought Armour, or Terminator armour as it is more commonly known. All of the veteran warriors of the First Company hold the Crux Terminatus—an honour signifying that they have undergone the rigorous training necessary to use Terminator armour. Only Space Marines so honoured are permitted to don the revered Terminator armour at times of special need. Terminator armour is so rare and precious that it is only deployed in the most difficult and exceptional circumstances. Those so equipped know their mission is a vital one and that the eyes of the whole Chapter will be upon them. Each Space Marine Chapter possesses just a handful of highly-prized suits of Terminator armour, each one greatly revered and rightfully feared by the Emperor’s foes. The armour is of an incredibly ancient design, and the secrets of its manufacture have long since been lost. The few suits that have survived to more recent times are reverently maintained by the Chapter’s Techmarines and carefully restored after every battle. Between battles Terminator armour is stored with great sanctity surrounded by trophies and testaments detailing its histories and the deeds of past occupants. The machine-spirits within Terminator armour are treated with great deference for their tremendous age and war-wisdom, often being feted for a victory as much as their occupant. [1]

Some First Founding Chapters are still capable of fielding a full company in Terminator armour, but most Successor Chapters are limited to using no more than a few squads at a time. It is impossible to say just how many suits of Terminator armour the Deathwatch has in the armouries of its Watch Fortresses across the galaxy. A Watch Commander always seems able to access a few suits when needed, but larger numbers must be begged from other Chapters, something the Deathwatch is loathe to ask. Terminator armour is particularly useful for combat-heavy Kill-team missions and the addition of one or two suits to a team can tip the odds decisively in their favour.[1]

In principle, Terminator armour is similar to a Space Marine’s power armour in that it employs electrically activated fibrebundle muscles to magnify the wearer’s strength and enable him to fight with deadly skill at close quarters. However, the thickened fibre-bundles and reinforced exoskeleton of Terminator armour carry much heavier plates of ceramite and adamantium than ordinary power armour, affording considerably more protection. The additional load-bearing capability also enables the suit to be equipped with improved weaponry and targeting gear, superior communications and other ancillary equipment. Deathwatch Terminators, for example, are always fitted with teleport homers to assist in the retrieval of team members, living or dead, from the foul alien pits they must enter.[1]

Weaponry for Terminator armour is designed for close quarters combat. By default they wield the noble Storm Bolter with its murderous rate of fire in one hand, and an all destroying power fist encases the other, a potent close combat weapon capable of crushing the strongest armour or alien carapace. Other specialised weapons include assault cannon, heavy flamers, thunder hammers and storm shields, lightning claws and chainfists. Although a few long-range weapons like the carapace-mounted cyclone missile launcher exist for Terminator armour these are rarities, the armour is designed for savage engagements at point-blank range.[1]

Space Marines in Terminator armour excel in city assaults, boarding actions or any other kind of engagement where the fighting is close and vicious. The superb protection afforded by Terminator armour mated with its devastating close-range capability enables First Company veterans to wade into the battle with irresistible force. When they are protected by Tactical Dreadnought armour, Deathwatch Space Marines can fight toe-to-toe with the deadliest Tyranid creatures or the most monstrous Orks. No matter how heavily armoured or numerous the foe, Deathwatch Terminators can vanquish them with the devastating weaponry at their disposal.[1]