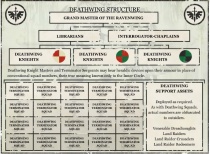 The Deathwing is one of the two current incarnations of the original Hexagrammaton formations of the Dark Angels Legion that continues into the 41st Millennium.[6]

The Deathwing formed mainly from the remains of the Host of Crowns of the Unification and Great Crusade-era First Legion. This Host was famed for its line breaking and marksmen abilities, and those of its Inner Circle who survived an infamous swore oaths that no member of the wing would ever leave the field of battle in the hands of the enemy, accepting death over dishonor or retreat. During the Horus Heresy they acted as a special operations unit specializing in not only line-breaking but also as elite veteran infantry and honor guards.[11]

Today, the Deathwing is unique among the Space Marine chapters in that the entire company fights exclusively in Terminator armour. The company's armour is a bone white colour, rather than the dark green of the majority of the Chapter, or the black of the original Legion . This alteration of the color scheme applies only to the Dark Angels, not to their successor Chapters. The Deathwing's insignia is a variation of winged sword worn by the rest of the Chapter - the blade of the sword is depicted as being broken in Deathwing iconography. More so even than the regular Dark Angels, the Deathwing are notoriously stubborn and resistant, refusing to buckle under extreme pressure from enemy advances, even when it would be more advantageous to retreat.[Needs Citation]

The Deathwing is not solely a tactical formation - promotion to the Deathwing also means that an individual is bestowed many of the darkest secrets of the Chapter. The most closely guarded of these secrets is that of the betrayal of Luther and the Fallen, and the subsequent fate of their Primarch, Lion El'Jonson.[1]

When a battle-brother is being considered for a place in the Deathwing, it is standard procedure for them to be judged by the Grand Master of the Librarius, who determines if they are worthy of ascension.[7]

The Deathwing itself contains multiple specialized sub-formations, such as Deathwing Command Squads and the dreaded Deathwing Knights, who comprise the elite of this already veteran Company.[4] As of the Era Indomitus, it has also come to include Primaris Bladeguard Veterans.[10]

The events on Thranx, where a squad of Terminators freed a recruitment world of Genestealers (later known as "The Tale of Two Heads Talking") became one of a main legends that were told to young members of the Chapter. Other famous tales include the "Scouring of the Space Hulk Place of Fears", "Fall of the House of Pervigilium", the "Wisper in the Gloom" and "Vengeance of Beleagerest" amongst a lot of other. These stories tell about self-sacrifice and overwhelming odds so instil in every Dark Angel a zealous drive to right ancient wrongs and seek out the enemy no matter where he might hide. As they progress through the Chapter's ranks such preparing helps a Dark Angels to know the ultimate true about the dark past of their Chapter.[3] 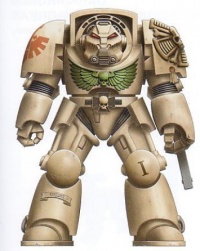 During the Horus Heresy, and prior to the events on Thranx, the Deathwing coloured their armour in the black of the legion. Having some of their armour plating painted bone white signified a warrior of the Deathwing that has taken a mortal wound meant for another and survived.[2][11a][15]

The unique all bone white colour scheme was later adopted as a mark of remembrance for a lone squad of Dark Angel Terminators who freed a recruitment world from a Genestealer infestation and slew a Broodlord that had terrorized the Galaxy.[4] As they did not expect to survive such a confrontation, they painted their armour white in preparation for their deaths. In the end the Deathwing triumphed and a vital part of the Dark Angels' heritage was saved.[2]

Notable members of the Deathwing