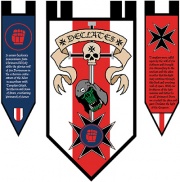 Banner of the Declates Crusade

The Declates Crusade was an Imperial Crusade.[2]

During Waaagh! Gitzmott, entire worlds in the Declates System fell overnight. The Crimson Fists were dispatched quickly to deal with the Ork invaders. Upon arrival, the Chapter at first scored victory upon victory with hit-and-run attacks.

However, the Crimson Fists began to lose ground as the immense Ork invasion brought its full weight to bear. Help was needed fast. The massive Ork army was heading towards the valuable Forge World Declates IV and the densely populated hives of Declates V. The Imperium could not let these centres fall. Nearby Black Templars heeded the call to arms, and soon the campaign was brought back to a sort of balance. It was on Declates VII that the fate of the system was determined.

Gitzmott was located and slain on the barren plains of the planet by an Emperor's Champion. Now without a leader, Gitzmott's forces lost focus and abandoned the field of battle. From there on, the campaign became a mopping up operation. Both Crimson Fists and Black Templars sustained heavy casualties as the odds against them were often five to one. Despite these difficulties, both Chapters earned battlefield renown and are forever heroes of the Declates System. These battles are known to the Crimson Fists and Black Templars as the Declates Crusade.

As a symbol of solidarity against what seemed to be an innumerable foe, Astartes from both Chapters "exchanged" iconography and often fought in mixed squads. Black Templars painted their left hands red, and Crimson Fists painted a Templar cross onto their right knee. This unusual gesture of unity helped establish a tight bond that steeled the resolve of the brave warriors involved.

Another instance of battle brothers cementing their unity in the face of almost certain death was that of the red-and-black Templar cross. Adding a red sliver to each of the four spokes of the Black Templars Chapter symbol visually conveyed this bond. 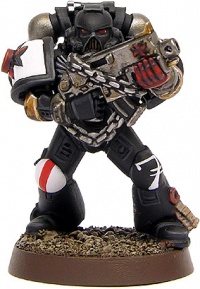