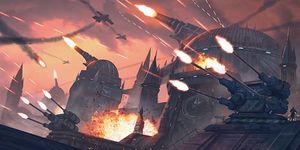 Defence Lasers are a common anti-voidship defensive weapons used by the Imperial Planetary Defense Forces.[2] A gigantic laser weapon, it is a monstrous engine of destruction so large it can only be mounted on fixed platforms.[2][1] They use vast amounts of power to fire, blacking out power grids for miles around with each volley. Designed for use against invading warships in orbit, they can drive away anything up to a Cruiser.[1]

Average length of Defence Laser's main laser chamber - is over 15m (with an overall weight of many tons) and this weapon have little use against ground-based targets, where its practical range equaled nearly a mile at ground height.[2]