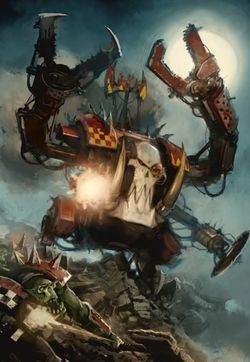 Belching smoke as they charge across the battlefield, Deff Dreads are deadly Ork walkers. In a similar way to Space Marine Dreadnoughts, a Deff Dread's pilot must be permanently wired into the machine, Deff Dreads require the skills of both a Mekboy and a Painboy to construct. Aside from basic design elements, Deff Dreads are decorated, armed, and configured in countless ways, each one reflecting the tastes and vision of the Mek who designed it. As for the pilot of a Deff Dread, as is the case with Killa Kans, the Ork volunteers are permanently hard-wired directly into the walker itself. Installing a pilot into a Deff Dread involves surgically implanting numerous tubes, nerve probes, cranial jacks, and other, more esoteric bits of mechanical devices plugged directly into his brain and spinal column.[2]

This is a painful and disorienting experience, which requires an Ork to trade away much of his natural Orkiness, and spend the rest of his days trapped in a claustrophobic, incredibly loud, hot, and uncomfortable metal can, with only a small slit provided to see through, in exchange for raw killing power.[2]

The integration of an Ork into a Deff Dread makes the machine very deadly, for these orky machines can move as if they were the pilot's own body. Ork Deff Dreads are loud, stompy and shooty, three things that symbolize Ork warfare and culture. Deff Dreads are normally armed with two huge pincers or saws and two big shootas, rokkit launchas, skorchas or Kustom Mega-Blastas.[1]

In battle, Deff Dreads act as support units and mobile weapon platforms, working in compliment with ork mobs or backing up a Warboss and Nobz. Even a single Deff Dread brings enough firepower and ferocity to an engagement to tip the scales of even the most fearsome battle in the Orks’ favor. Extremely expensive, Deff Dreads are used sparingly by those Warbosses who can afford them. This irritates none more than the pilots locked within, whose only release from the tedium of being welded inside these machines comes in slaughtering their foes on the battlefield.[2]

Big Mek Dreads are controlled by Big Meks and lead Killa Kans and Deff Dreads into battle. Unlike other Ork walkers, though, Big Meks are not permanently installed within their Dreads and can freely move out of their walkers' top hatches. Big Mek Dreads, however, are exclusively used by the Bad Moons, as only their Ork Clan have enough teef to buy such an impressive Dread. This includes the Big Mek Dreads' Kustom-built Shokk Attack Guns.[3]