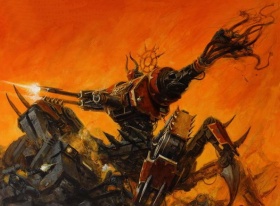 The Defiler is a Chaos Daemon Engine and are among the most common of their kind. They were created by the Dark Mechanicum on the Forge World of Xana II at the command of Abaddon the Despoiler in preparation for the First Black Crusade.[1][8]

Unlike the tanks and vehicles of the Imperium, which are mostly operated by humans, a Defiler is controlled by a daemon. Chaos Sorcerers use arcane Chaos magic to draw the essence of a powerful daemon from the Warp and trap it within the rune-bound hull of the machine. Powerful spells of appeasement and pacification are utilised to keep the newly bound daemon from causing havoc among the forces of Chaos.[2]

Standing on six piston-driven limbs, the Defiler's hull supports a massive turret, which houses the main armaments of the infernal machine. While Defilers are usually seen with large arrays of weapons, such as a Reaper Autocannon and a Havoc Launcher, its main firepower comes in the form of a artillery-like battle cannon. There are often numerous variations of the weapon systems used; in some cases, Reaper Autocannons have been upgraded to house twin-linked heavy bolters or lascannons instead, whereas there have been sightings of Defilers with heavy flamers on multiple occasions.[Needs Citation]

In addition to being able to lay down a barrage of heavy fire, Defilers are also terrifying close combat opponents. When a Defiler arrives on the battlefield, the technosorcery keeping the bound daemon peaceful is released, allowing the daemon to truly enjoy the battle. As daemons are immortal and unconcerned for the survival of its machine host, Defilers ignore hits that would kill normal tank crews and continue on rampages of destruction that would otherwise be impossible to proceed with. Of its six limbs, Defilers use four for moving around and two arm-like appendages to crush enemies in their pincers.[Needs Citation] 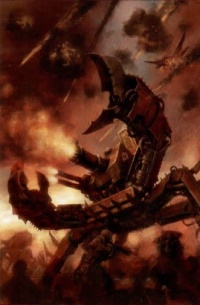 Dedicated to Khorne, a Slaughterfiend is a Defiler subjugated and ridden by a Khorne Berzerker. The first recorded instance of this reckless tactic came during the war for Eclipsion Prime, when the Skull Champion, Akraghar of the World Eaters, jumped from the ruins of a hivespire onto the eponymous Defiler, known as Slaughterfiend, and managed to subdue the daemonic machine to his own will and hence ride it like a monstrous steed.[6]

Ever since, Berzerkers have attempted to emulate Akraghar’s actions and carve rune-etched links about the throat of the infernal vehicle, binding it to the will and rage of Khorne. Competition to ride such beasts is fierce and though many try, very few succeed. In battle, whole units of Berzerkers will attempt to clamber onto a nearby Slaughterfiend, if only to steal a ride into the fray.[6]

Typically Slaughterfiends renounce most ranged weapons and are armed with additional close assault weapons. They are often faster than other Defiler variants, as they are worked up into an agitated state. Groups of Slaughterfiends are known as Bloodpacks.[6]

Dedicated by the Death Guard to the rancid service of Nurgle, a Desecrator is an unstoppable force commonly armed with a Vomit Cannon, Reaper Autocannons and Battle Claws.[3]

A Debaser is a Defiler perverted to the causes of Slaanesh by the Emperor's Children. It is armed with a devastating payload of Sonic Weaponry; including Ultrasonic Disruptors, a Death Wailer and Blastmasters in addition to its Battle Claws.[5]

When the Thousand Sons dedicate a Defiler to the nefarious wills of Tzeentch, it is referred to as a Deceiver. Such vehicles have an array of confusing weapons such as Tzeentch Cannons, Ether Cannons and Heavy Flamers, as well as Battle Claws and Warp Flames which are used in close assault. Typically, Deceivers are more accurate in a firefight than other variants of the Defiler.[4]

It is not clear when Abaddon ordered the creation of the Defilers; in Garro: Oath of Moment (Audio Book), Nathaniel Garro fights against a giant war machine that matches the description of a Defiler, though it is never named as such, during the Battle of Calth.[7]