Deimos is a moon originally of the planet Mars that serves as a Forge World to the Ordo Malleus.[1] 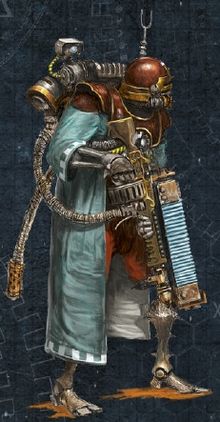 When Malcador the Sigillite created the Grey Knights Chapter during the Horus Heresy, the moon of Deimos was displaced from its orbit and relocated to the orbit about Titan by way of hidden, arcane technologies.[1]

This moon provides the Grey Knights with the majority of their ammunition, armour and equipment which ranges from psycannons to Land Raider components to starship ordnance within the Forge World's subterranean halls.[1] Furthermore, Deimos holds the STC imprints for the entire canon Space Marines' lore and other wonderful weapons.[2] Only the more unique weapons such as Nemesis Force Weapons are not made on Deimos, instead they are crafted by the Chapter's Techmarines at their Fortress Monastery. The transfer of Deimos-produced equipment is primarily done through dull-minded Servitors who have their memories scrubbed shortly after completing their task. This process prevents the arcane secrets of the Grey Knights from falling into the hands of the Adeptus Mechanicus whilst also allowing the Adepts of Mars to shelter their own dangerous knowledge from the Chapter.[1]

The Icon of Deimos[4]

Deimos has both defending Skitarii as well as 3 Knight Houses, including House Steel. These normally act as guards but will sometimes march forth with the Grey Knights.[3]