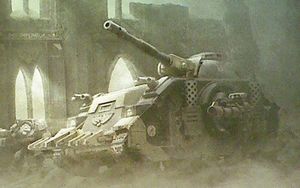 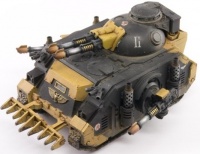 The Deimos Pattern Predator is an older design of Predator Battle Tank, dating back to the Great Crusade.[1]

An ancient and revered design of Predator Tank, cited by the Codex Astartes as a spiritual mentor, no less, there are almost as many patterns of Predator as there are of the ubiquitous Rhino hull it is based upon. One such variant is the Deimos Pattern Predator, first issued en-masse to the Space Marine Legions of the Great Crusade. Artificer-crafted by the finest machine-wrights of the great forge-complexes of Mars, the Deimos Pattern Predator has since been modified to the Annihilator variant by those Chapters who are supplied with this pattern.[1]

A design that is prized in the Imperium but now almost entirely lost, the Deimos Executioner is armed with a mighty Plasma destroyer. The powerful weapon allows it to blast apart even the most powerful armour with contemptuous ease. However only the Forge World of Ryza is still able to manufacture the advanced photo-plasmic cells needed for the Executioners weapon. As a result of this spare parts shortage, many chapters' Techmarines have replaced the main Plasma Destroyer with a Conversion Beamer. This modification turns the Executioner into a powerful siege tank and long-range tank destroyer, but this firepower is gained at the cost of maneuverability and increases vulnerability to short-range attacks.[2] 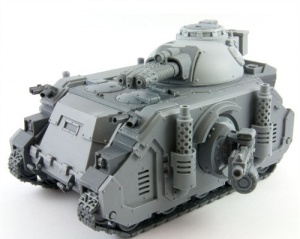 An ancient design dating back to the early days of the Great Crusade, the Deimos Pattern Predator Infernus is armed with a fearsome Flamestorm Cannon or Magna-Melta as well as Heavy Flamers and Heavy Bolters. STC data indicates that the Deimos Pattern Infernus may have been an attempt to replicate the Baal Predator design after the Blood Angels refused to share the design with the Adeptus Mechanicus. Accordingly, the Mechanicus maintains that the design is superior to the Baal Predator in speed, protection, and firepower.[3]

The ancient design however has largely been replaced by the Land Raider Redeemer in most Chapters, including the Crimson Fists, Fire Lords, and Subjugators. But with the new Tyranid menace emerging across the Imperium, the Deimos Pattern Infernus' close-range firepower has seen renewed use and interest by many within the Space Marine.[3] 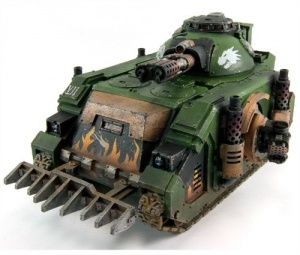