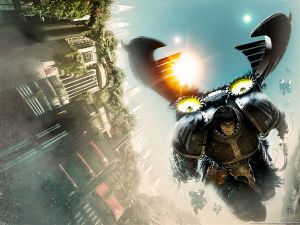 Deliverance Lost is the 18th novel in the Horus Heresy Series, written by Gav Thorpe. It was published on December 27, 2011. It was later included in "The Novels: Volume 4" eBook collection.

As the Horus Heresy divides the Imperium, Corax and his few remaining Raven Guard escape the massacre at Isstvan V. Tending to their wounds, the bloodied Space Marines endeavour to replenish their numbers and return to the fray, taking the fight to the traitor Warmaster. Distraught at the crippling blow dealt to his Legion, Corax returns to Terra to seek the aid of his father - the Emperor of Mankind. Granted access to ancient secrets, Corax begins to rebuild the Raven Guard, planning his revenge against his treacherous brother primarchs. But not all his remaining warriors are who they appear to be... the mysterious Alpha Legion have infiltrated the survivors and plan to destroy the Raven Guard before they can rebuild and threaten Horus's plans.

In the aftermath of the Isstvan V Dropsite Massacre Primarch Corvus Corax of the Raven Guard is on the run with roughly 3000 survivors from his Legion. After ambushing and destroying an Iron Warriors force pursuing them they hide in the hills until they are forced into a final confrontation with the World Eaters led by Angron. The Raven Guard prepare for a last stand but at the last minute are rescued by Commander Branne, the commander of the garrison left behind on their homeworld of Deliverance. Guided by the prophetic dreams of Praefector Marcus Valerius Branne left his post to rescue the survivors.

It is revealed that during the chaos of the Dropsite Massacre Alpha Legion troops recovered the bodies of slain Raven Guard and surgically removed their faces before implanting them onto Alpha Legionnaires, allowing the Alpha Legion to infiltrate the Raven Guard.

After a tense and slow few weeks trying to escape the Isstvan system in Branne's stealthed ship Avenger Corax splits up the survivors, sending two ships back to Deliverance while continuing with one ship to Terra. En route tensions become apparent between the survivors of the massacre and Branne's garrison who didn't go through the experience. Upon arrival in the Sol system the Raven Guard are stopped by an Imperial Fists force led by Captain Noriz. After searching the ship the Imperial Fists escort them to Terra, where Corax in nonplussed to learn that the Emperor has secluded himself deep beneath the Imperial Palace and is leaving governing and defence preparation to Malcador and Rogal Dorn respectively. Corax gets in an argument with Dorn and Malcador over trying to see the Emperor causing the Emperor to psychically communicate through Malcador, implanting in Corax's mind the memories he needs to locate and secure the genetic material and accompanying technology left over from the Primarch Project which Corax can use to rebuild the Raven Guard by rapidly creating new Space Marines.

Along with a small force of Legio Custodes and the Mechanicum's Magos Biologis Corax and his honour guard enter "the Labyrinth," a complex underground maze created by the Emperor to protect the Primarch Project. Despite some losses Corax is able to command his forces into the right spots at the right time to overload the Labyrinth's randomly-changing mechanism, jamming it open so the Primarch Project can be reached. The Raven Guard then return to Deliverance with it.

Undercover on Kiavahr, the planet Deliverance orbits, Omegon makes contact with members of the tech-guilds that ruled Kiavahr before the uprising led by Corax removed them from power. He receives intelligence from one of the undercover Alpha Legionnaires about the Primarch Project and begins preparations to use the tech-guild forces as a distraction to steal the gene-technology. Corax becomes obsessed with the creation of new legionaries and once the Magos Biologis and Raven Guard chief apothecary Vincente Sixx figure out how to use the gene-technology a new breed of Raven Guard legionaries is quickly bred and nicknamed "the Raptors."

The Raptors are tested in battle in an assault on a Word Bearers station on Cruciax and prove effective if somewhat over-eager. Under instructions to sabotage the creation of the Raptors one of the undercover Alpha Legionnaires taints the gene-code with a poison distilled from daemon blood. This causes the next batch of Raptors to hideously mutate. Omegon launches his attack on Ravendelve, the location of the secret gene-project on Kiavahr, and amidst the battle the three undercover Alpha Legionnaires reveal themselves, killing several real Raven Guard including Vincente Sixx. They are joined by Alpha Legionnaires in Raven Guard armour who snuck in during the fight and steal all the gene-tech despite the mutated Raptors being freed from containment by a dying Vincente Sixx and attacking the false Raven Guard. Leaving the gene-tech where Omegon instructs them the three undercover legionnaires head for a landing pad only to confronted by Commander Agapito, Branne's brother, who figured out there were traitors in the legion. Rather than be captured the three kill each other. Omegon, disguised as a Mechanicum super soldier, recovers the gene-tech and escapes Kiavahr undetected.

The Raven Guard recover from the battle against the tech-guilds and root out the Alpha Legionnaires in their midst by testing their DNA. Declaring their resolve to take the fight to Horus they launch an attack against an Emperor's Children stronghold called the Perfect Fortress. Marcus Valerius, now promoted and in charge of a new cohort of Therion soldiers after his last group was sacrificed as a diversion to escape Isstvan, takes the brunt of the Emperor's Children resistance until the Raven Guard launch their planned attack and take control of the fortress. Corax announces that Valerius's forces will hold the fortress against traitor counter-attack with the aid of other loyalist forces who are on their way before leading the Raven Guard into their next attack.