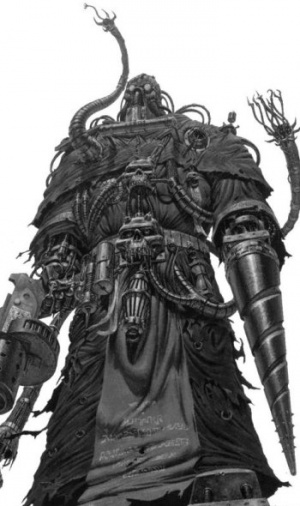 Magos Explorator Delphan Gruss is a member of the Adeptus Mechanicus who hails from the Forge World Arenxis Minoris in the Galactic South.

After reaching the rank of Magos he spent several decades amongst the Explorator fleets where he developed a deep knowledge of pre-Imperial technology from rediscovered worlds. His life's quest is to find the Omnicopaeia, an artifact that he believes contains every Standard Template Construct (STC) blueprint created since the Dark Age of Technology. His search for the Omnicopaeia has often led him into conflicts with local authorities, members of the Inquisition, and unscrupulous treasure hunters.

Magos Gruss is heavily augmented with two bionic arms. His left arm has been replaced with a bionic attachment known as a Breacher, an implant designed to drill through slag piles and bulkheads (equally capable of boring straight through a person). Gruss also has a bionic head that houses a re-breather mask (which compliments his advanced bionic lungs) and two advanced bionic eyes incorporating a motion tracker, a bio-scanner and range-finder gunsights. Like most members of the Adeptus Mechanicus, he has mechadendrites implanted on his body. 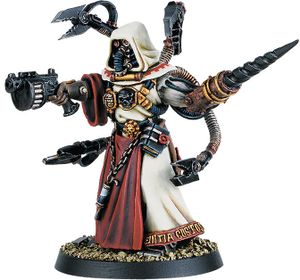