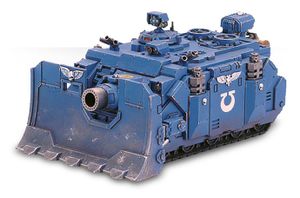 A Vindicator equipped with the Demolisher cannon.

The Demolisher Cannon is a short-range, large-bore direct fire cannon mounted on various Imperial vehicles, but most commonly on the Baneblade, Leman Russ Demolisher and Vindicator. Primarily designed with siege, urban, and bunker-busting warfare in mind, the cannon has also been known to be of great use against enemy vehicles and infantry, destroying both with equal ease.[1][4a][4b]

The Demolisher fires special ammunition much larger than that used in the Battle Cannon, allowing it to punch through layers of concrete and plasteel alike. A Demolisher shell is constructed with an outer layer of standard high explosive and shrapnel, which surrounds a chemical core. Upon impact, the explosive layer detonates, punching a hole in the enemy's armour and spreading shrapnel over a wide area. It also starts a chemical reaction in the core, causing it to super-heat into a jet of plasma, which lances through the compromised armour, spreading molten death over a wide area and literally ripping the target from the inside out. The tremendous recoil produced by firing the cannon is capable of lifting the front end of a tank off the ground and, were it fired while moving, risk causing it to roll over.[1] However, the cannon has an effective range of one kilometer,[3] limiting its utility to short-ranged combat such as urban and siege warfare.[1][4a]

The Demolisher Cannon used by Vindicators fires a special siege shell, consisting of an armour-piercing tip, heavy shell casing and a massive explosive charge micro-fused to allow penetration of a building or bunker before detonating.[5] The siege shell is launched thanks to an on-board rocket engine, which uses solid propellant shaped to control its time and rate of burn for maximum accuracy. In order to avoid the build-up of rocket blast-back, this gas is vented when the cannon is fired to prevent the barrel from deforming or bursting from over-pressure. The sheer size and mass of the shell, however, reduces its stowage capacity and accuracy over long ranges, even with fin stabilisation and booster burns.[2a][2b] As such it is also limited to being used for destroying enemy fortifications and fighting in close-quarters combat such as jungle warfare.[2a][2b][4b]