The Departmento Munitorum (or Munitorium[11]) is a department of the Administratum devoted to the general administration, supply and command of the Imperial Guard, however despite its necessity it is often viewed by the Guard as ineffective. The Munitorum has ultimate responsibility for the raising of new regiments, training of troops, provision of equipment and supplies, and transportation of troops and equipment to and from theatres of war. It is primarily a logistical organisation, like the Administratum, but while the Administratum deals with civilian logistics, the Munitorum deals with the logistics of war. Using military as opposed to civilian ranks, the Departmento Munitorum dates back to the Great Crusade.[7]

The Munitorum is financed by tithes of men, money and material, and all Imperial planets able to support the Imperial military forces in a sector are regularly called on to do so. To make sure the tithes are provided as and when required, representatives of the Departmento Munitorum are present on almost every Imperial planet. Representatives of the organisation are also present on all Imperial Navy ships, and wherever Imperial Guard forces are stationed.[Needs Citation] The Munitorum was founded shortly before the end of the Great Crusade. It was created from the Corps Logisticae, a division of naval administration, shortly before the Ullanor Crusade.[6] Within a few short months of its establishment, the Departmento Munitorum no longer restricted its activities to the mere task of resupply and maintenance, but also became enmeshed in the mire of politics surrounding the great fleets and their military leaders. They were tasked with ensuring adherence to central strategy within the Expeditionary Fleets and with bringing the more wayward elements of the Imperial military back in line. This led to mistrust and unrest amongst the fleets themselves, as many within the military saw this as bureaucrats trying to take over and run the war effort - a view shared by several very notable individuals who resisted the interference of the Departmento Munitorum as much as they could without directly refusing to comply.[8]

The Munitorum is organised to allow each level of the organisation to respond effectively to threats, regardless of size and location. The local departments of the organisation can raise tithes from worlds close to a war zone without needing a response from the higher levels of the Departmento Munitorum. As the level of a threat increases and more local departments of the munitorum become involved, the amount tithed, and the amount of planets tithed from, increases. At this point higher levels of the Departmento Munitorum will also become involved, and may funnel additional resources from other parts of the Imperium in to a war zone. The local Departmento Munitorum presence in a subsector has the ability to impose instant tithes, without forewarning, as and when required. Because of this, central command is not needed, due to the functional autonomy of each level of the organisation.[Needs Citation] 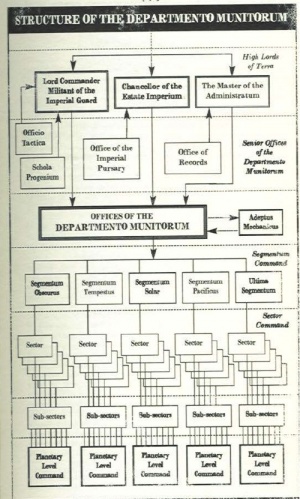 Organization of the Departmento Munitorum[1]

The Departmento Munitorum is represented and overseen by three members of the High Lords of Terra.[1]

The Departmento Munitorum has four Senior Offices, each answering to one of its three directors:[1]

Below the senior offices are a vast multitude of lower Offices each overseeing a different task. Many of these offices coordinate their activities with the Adeptus Mechanicus.[1]

The highest level of Munitorum strategic command is at the Segmentum level, overseeing Munitorum activities in its respective region. Each Munitorum Segmentum command is in turn divided into a Sector, Sub-sector, and planetary command.[1]