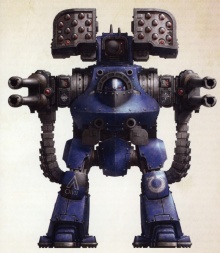 Developed alongside the Castraferrum Pattern and Lucifer Pattern, the Deredeo Pattern was designed as heavy assault platform.[3b] Rather than being a general assault unit like others of its kind, the Deredeo Pattern Dreadnought is a dedicated heavy weapons platform, intended to combine superior firepower with the flexibility and durability of a Dreadnought chassis.[4] It was initially deployed in limited numbers to each of the Space Marine Legions due to difficulties in its manufacture, its durability and firepower saw demand for the Deredeo pattern increase after the outbreak of the Horus Heresy.[1]

The Deredeo pattern Dreadnought, with its formidable carrying capacity and battlefield stability, was once used as a test-bed platform for a number of advanced Legiones Astartes weapons systems, including the Anvilus Autocannon Battery, hellfire plasma cannonade, Arachnus Heavy Lascannon Battery, Volkite Falconet, and the carapace mounted Aiolos missile launcher which was capable of independently targeting enemies. The Deredeo is also capable of mounting Heavy Flamers or Heavy Bolters. For an anti-aircraft role, it is capable of firing Boreas Air Defence Missiles.[4] The Deredeo also features a Helical Targeting Array and Atomantic Shielding.[2]