The Despoiler Class Battleship is a Chaos starship.

Designed as a long range heavy fighter carrier in the mid-36th Millennium as part of the Gareox Prerogative, It was based upon schematics of the Death Guard vessel Terminus Est, found among the ruins of the perdita world of Barbarus.[1]

At the time, within the upper echelons of Battlefleet Tempestus command, the general feeling was that Attack Craft were overtaking all other forms of space combat and so plans for fifteen Despoiler-Class ships were put into production. Only three were ever finished, however, as Command realised that battleships were not being outmoded and production ceased. These ships were relegated to patrolling shipping lanes where their fast fighters could be best used against small pirate fleets.[1] Every Despoiler Class Battleship has been lost or corrupted by Chaos, due to an inherent design flaw that causes its Gellar Fields become vulnernable after extended Warp travel.[4]

Little attention was given to the three Despoiler ships until the Merciless Death disappeared while on extended tour in the Amerikon Sector. Thirty years later, it reappeared and destroyed sixteen unprotected Imperial transport ships during the Banardi Conflict (the ships being en-route to Banardi Prime). The Merciless Death was then sighted in numerous conflicts, gradually edging closer to the Eye of Terror before disappearing in the 39th Millennium. Soon after the remaining two disappeared after reportedly firing on friendly vessels before escaping into the warp. They have all been sighted since, during the Gothic War.[1]

The Despoiler Class Battleship's primary armament are its 8 squadrons worth of Swiftdeath Fighters, Doomfire Bombers, and Dreadclaws. For ship-to-ship combat, it is equipped with two Lance turrets and two Weapons Batteries.[1] 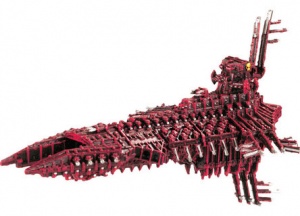