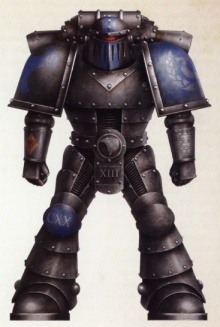 Destroyer Marines were a type of elite Space Marine squad employed during the Great Crusade and Horus Heresy.

Equipped with otherwise forbidden or proscribed weaponry from the Age of Strife such as radioactive, biological, or other horrific methods of death, Space Marine destroyers were often shunned or seem as dishonorable by their Legion counterparts. However due to their combat effectiveness, they were considered a necessary evil by Imperial commanders.[1]

Led by a Space Marine Sergeant, Destroyer Squads were most typically equipped with Missile Launchers armed with Rad Missiles or Volkite Serpenta. They also commonly carried Phosphex Bombs, Rad Grenades, and Melta bombs.[1] To better rain death upon their foes, they were sometimes equipped with Jump Packs.[3] 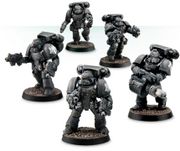