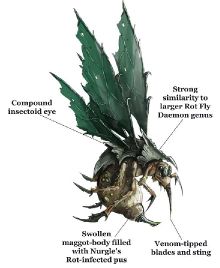 A drone of the Destroyer Hive

The Destroyer Plague is a disease conjured by Nurgle, the Chaos God of Decay. It takes the form of warp-spawned flies that infest every orifice of the body and lay their eggs in their hapless victims. The victims' abdomens become bloated until they finally burst, unleashing another wave of plague flies to spread the contagion once more. The Destroyer is described as the most horrific and vile plague in Grandfather Nurgle's arsenal.[1a]

When Calas Typhon, First Captain of the Death Guard, led his Legion into the warp, the Legion was struck down by a curious paralyzing illness, a precursor of what was to come. Though Astartes are normally resistant to disease, against the power of Nurgle they had no defense. As the Destroyer spread throughout the Death Guard fleet, bursting the guts of the hardy Space Marines, Typhon - on the bridge of his flagship, Terminus Est - was the first to stir. He came uncertainly to his feet, and spoke only one phlegm-laced word: "More." With that word, the flies left their hosts broken and bloated, and entered Typhon's body like a wave when the corrupted Death Guard Captain Ignatius Grulgor dissolved into himself[2]. Surprisingly, he remained on his feet, but was now a hive of pestilence. He is now known as Typhus, Herald of Nurgle and host of the Destroyer Hive.[1b]