A Devastator's reach shall be without limit and his touch without mercy. Fire shall roar from his fingertips, but it shall consume him not. Thunder will roar when he calls, yet it will swallow him not.

Let the Devastator squad be thy blazing wrath, bringing the light of the Emperor's justice to the darkest corners of the battlefield. Wherever he stands, that shall be his fortress of righteousness. He shall hold in his gift the fate of all who pass before his unblinking gaze.

Roboute Guilliman, quoted in the Apocrypha of Skaros.[1a] 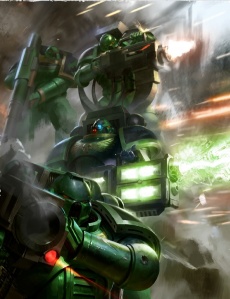 Devastator Squads are specialised Firstborn[7] Space Marine squads tasked with long-range fire support, entrusted with the Chapter’s rarest heavy weaponry.[1a] In a typical Codex Chapter, two Devastator Squads are assigned to each of the four Battle Companies, while the entirety of the 9th Reserve Company is composed of Devastators.[1b]

Most Devastator Squads are composed of Space Marines who have recently been promoted from Scout Squads. Though veterans of dozens, even hundreds, of campaigns, service in a Devastator Squad will be their first experience in power armour as part of the main Space Marine army.[1a] Those newly-appointed to a Squad, armed only with basic gear, are given the primary duty of providing close support and calling out targets for their more experienced battle-brothers. These Space Marines are armed with the squad's four heavy weapons, an honour earned only after the Marine has proven himself steady and dependable in the heat of battle.[1a]

The Devastator Squad is made up of between four to nine Devastator Marines and a Space Marine Sergeant. The type and use of these heavy weapons can vary greatly, depending on the mission or nature of the Chapter itself.[1a]

After completing tours of service in the Devastators, Marines are typically assigned to Assault or Tactical Squads.[1d]

In addition to their power armour, Devastator Marines are armed with bolt pistols, boltguns, frag and krak grenades. The Sergeant also carries a Signum and may be equipped with melta bombs as well. The Sergeant can also replace his boltgun and/or pistol for a chainsword, combi weapon, plasma pistol, Grav-pistol, power weapon, and power fist. For transportation the Squad can be carried into battle in a Drop Pod, Rhino or Razorback[1c].

Four of the Devastators replace their boltguns for any combination of the following: