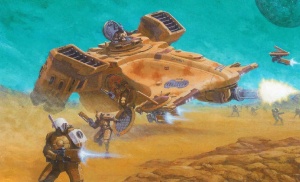 The TY7 Devilfish is the armoured personnel carrier of the Tau Empire. It is the standard transport for Fire Warriors as well as Pathfinder Teams and serves as the chassis for the Hammerhead Gunship and the Sky Ray Missile Destroyer.

The Devilfish has been the workhorse of the Tau ground forces since their first encounter with the Imperium of Man.[3] It has been used on a number of worlds, including Gravalax, Taros and Pavonis.[Needs Citation]

Primary armament is provided by a burst cannon mounted in the chin-turret, which is aimed and fired by the Devilfish's pilot. Secondary armament is typically a pair of Gun Drones, though these may be replaced with a Smart Missile System.[1][2][3]

The Devilfish is protected by a nano-crystalline alloy, the composition of which is as yet unknown. While lightweight and malleable, the metal is strong and corrosive-resistant, providing good protection while cutting down on weight, improving the vehicle's speed and flight characteristics.[3] While sufficient against most small-arms, the Devilfish is vulnerable against Imperial anti-tank weaponry, such as krak missiles, especially against the thinner top armour.[4]

The Devilfish uses a complex dual anti-grav/jet propulsion motive system. Utilizing the Tau's command of techno-sorcery, the vehicle's anti-gravity generators produce an anti-grav "cushion" on which it floats, allowing it to skim over a planet's surface and avoid hazardous obstacles. Two powerful jet engines, located on either side of the vehicle, are able to pivot to either propel the Devilfish forward or give it additional lift. These jet engines, while equally noisy, are more reliable and efficient than Imperial models.[3]

Much of the Devilfish's systems are highly automated, which helps reduce the number of crew to a single pilot.[3] In addition to their standard weapons, control and communications systems, the Devilfish is also equipped with retractable landing skids and can be further modified with additional upgrades.

The passenger compartment of the Devilfish can hold a full Fire Warrior team of twelve warriors. These troops can disembark from three access hatches, located in the rear and on either side of the vehicle. Since the Devilfish is fully pressurised, it lacks fire points from which the embarked troops may fire from the vehicle.[1][2]