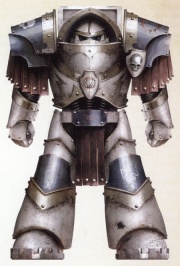 The Devourers were a unit of Terminator bodyguards to Angron during the Great Crusade.

Unlike many other praetorian guards of other Primarchs, Angron held nothing but disdain for the Devourers and they were only assembled because of the recklessness Angron displayed in combat, going off into bloody rampages completely on his own. Angron and other World Eaters like Khârn and Kargos considered the Devourers to be weak and overly concerned for their Primarch who cared nothing for them.[1] Indeed, the mightiest warriors of the World Eaters were able to best Devourers in single combat.[1][3]

Post-Heresy, the Devourers were the name of the warband led by the former Devourer Tarugar.[2]