The horror began when a Chaos Space Marine armada arrived in the Diamor System. The Chaos fleet was led by the Red Honour, flagship of the Crimson Slaughter. Leading the armada personally was Kranon the Relentless, Chaos Lord of the Crimson Slaughter. The Crimson Slaughter had arrived in Diamor in search of the planet Amethal, on which was rumored to be a cure for the ceaseless voices that drove the Chaos Space Marines to madness. In addition, Kranon was working at the behest of Abaddon who also desired something on Amethal. With the maddened Kranon distracted and unreliable, the general execution of the invasion ultimately fell on the shoulders of the Chaos Lord Xorphas. The first attack of the war itself came at the Agri-World Peridos, where Black Legion ships under Xorphas bombarded the world from positions within an asteroid belt. The strikes had the effect of crippling Imperial food distribution in the region.[1a] 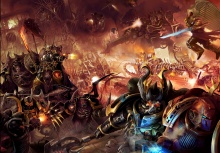 The Black Legion and Blood Angels battle for Amethal

Xorphas was able to strike at Amethal with surprise, having used Black Legion ships to draw off the System Defense Fleet and taking the world of Ioline as a distractionary measure. Nonetheless, the population of Ioline was massacred by the traitors. Hours after arriving in system, Kranon struck at Amethal. After the Crimson Slaughter fleetmaster Vorlak the Sly pushed through the Adeptus Mechanicus Fleet that opposed them, the Chaos marines struck at Amethal with a Drop Pod assault despite heavy losses in space. Under the orders of Xorphas, the Crimson Slaughter force would for now fight alone on the surface against Skitarii from Metalica while its Black Legion allies were held in reserve. In the battle that followed, the Crimson Slaughter was able to utilize the ghosts that haunt them to their advantage, as some of the spectres struck at the oncoming Skitarii. Soon, the Crimson Slaughter overran much of the world as the Word Bearers Dark Apostles accompanying them on the orders of Xorphas noted with glee that "the gate" would soon be secured.[1a]

By now, word of the Chaos rampage across the Diamor System had reached Tourmalid. The Governor and Lord Admiral of the entire system, Gordus, responded by sending a powerful fleet to engage in a game of cat-and-mouse with the traitors. The Crimson Slaughter, Black Legion, and Word Bearers forces in the system encircled the Industrial World of Ioline. After securing the northern hemisphere of the world, Xorphas led the capture of nuclear missile silos on the world and bathed the southern portion in radioactive fire. Afterwards, Black Legion Warpsmiths used surviving civilians as sacrifices in a vile ritual to mass-produce Daemon Engines. All of this however was to mask their true objective on Amethal.[1b]

On Amethal, the Crimson Slaughter now struck at the five major concentrations of Mechanicum forces on the planet. The five zones were given separate War Zone designations by the Crimson Slaughter: Carnage, Hatred, Perdition, Cruelty, and Malice. Kranon himself led the advance in War Zone Carnage, coming into combat with both Knights of House Raven and the Titans of the Legio Metalica. At War Zone Hatred, Traitor Titans of the Legio Excruciatus struck towards enemy positions while at War Zone Perdition, traitor forces were able to land in significant numbers amidst the Mechanicum defensive line. At the most important battlefront in War Zone Carnage, a strange phenomenon manifested itself. The Crimson Slaughter warriors here found themselves empowered by strange energies, becoming able to rip open tanks with their bare hands and shrug off enemy fire. With such power at their command, the Crimson Slaughter quickly overran the region.[1b]

However the Crimson Slaughter's victory was short lived. A force of Blood Angels led by Astorath the Grim quickly arrived. Consisting of elements from the 1st, 2nd, and 5th Companies, they were able to put the traitors to flight. Xorphas had in fact planned this, and as he continued his dark ritual a World Eaters fleet led by Kharn the Betrayer, known as the Butcherhorde, arrived in-system. Kharn's forces, led by the Berzerkers Korbadash and Vrakha, launched an immediate Dreadclaw assault on Amethal. Soon Kharn himself appeared, battling Knights in the name of Khorne. It was then that they met a fierce counterattack by the Death Company of the Blood Angels. Lord of Skulls battled the black-armored warriors in the streets of Amethal. During a duel with the Blood Angels Chaplain Daenor, Kharn was distracted from duel by challenging him Korbadash and then lured into an ambush by an Imperial Reaver Titan. The attack marked the beginning of a major offensive by the Legio Metalica, which decimated traitor forces. Due to the sheer numbers of traitors, the loyalist began to experience difficulty but the day was saved by the timely arrival of the Sanguinor[2a]. Nonetheless, thanks to the Daemon Engines of the traitors, the fight ultimately devolved into a bloody stalemate. As the Crimson Slaughter bled against the Blood Angels, Xorphas rejoiced as his plan continued as he hoped.[1b] He planned to use the carnage to destroy located on the Amethal so called Daemon cage with help of the Chaos artifact, known as Banshee Stone, to create a vast Warp Rift that would drown Diamor in a sea of Daemons. The carnage would extend Abaddon's Crimson Path from Cadia to Diamor, and one day hopefully Terra itself.[1c]

The traitors however experienced a loss when the Blood Angels 1st Company led by Captain Karlaen was able to destroy their Daemon Engine factories known as the Hex Infernum in a daring raid on Ioline.[2a] Xorphas made other moves across the Diamor system despite this. The Word Bearers Dark Apostle Gorath-Hel managed to infiltrate Diamor's capital of Tourmalid for his own sinister purpose.[1c] Soon enough, Gorath Hel had organized an uprising by Cultists on the world. Much of the Imperial Navy presence dry-docked on the world were destroyed during the mayhem by Word Bearers Chaos Terminators before their assault was halted by Karlaen's 1st Company Honour Guard. The Honour Guard also saved Gordus himself, who narrowly avoided assassination by the Terminators.[2a]

Meanwhile at the main battle front on Amethal, Lord Xorphas himself arrived at the main excavation site. Using an artifact known as the Banshee Stone, Xorphas began the final phase of his ritual and ordered that all forces hold back the loyalists. As the Imperial Navy launched an orbital bombardment of the site, the Blood Angels and Mechanicus forces began all-out attack on the excavation site. Xorphas' lieutenant Verzekh and Kharn led the defense, but a Blood Angels teleportation assault led by Captain Aphael saw Verzekh killed. However Xorphas was able to complete his ritual and escape via teleportation just as the Blood Angels overran his position. Elsewhere, other traitor units, including Kranon's entourage of Crimson Slaughter, was able to escape. Many of the traitors escaped by capturing loyalist craft.[2b]

Ultimately, though Imperial forces drove off the Chaos assault the barrier between realities had been weakened on Amelthal to such an extent that it may only be a matter of time before Xorphas' plan succeeded and the Diamor System drowned in a Daemonic tide. Faced with this reality, the Blood Angels called for the aid of the Grey Knights[1c]