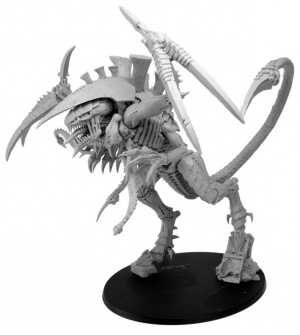 The Dimachaeron is a species of Tyranid.[1]

The Dimachaeron appears to have evolved for a single purpose: to slaughter those identified among their prey as leaders in the midst of battle, spreading terror and dismay among the ranks of all who resist the Hive Mind's advance. Bristling with blade-arms studded with sickle-like claws, it can slice a fully armoured Space Marine in two and is able to leap a Leman Russ Battle Tank without breaking stride. When stalking its prey the Dimachaeron dispenses with the slow, stealthy approach of the Lictor and instead relies on sheer brutality and animalistic rage, leaving a gore-soaked trail of carnage behind it.[1]

Perhaps even more fearsome than the array of sickle claws, razor-sharp teeth and tail spikes is the spine-ringed maw hidden within the Dimachaeron's thorax. Any foe unfortunate enough to be caught in the beast's grasp will be held in place while the thorax hinges open and the fanged maw impales them. While the trap-like jaws of the Dimachaeron's ribcage hold the victim in place, the spine-maw injects them with a potent bio-acid, reducing their internal organs to a slurry of nutrients that are then absorbed by the Tyranid to bolster its own physiology, allowing it to ignore all but the most horrific of injuries.[1]