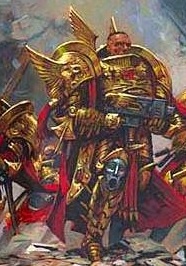 Diocletian Coros was a Prefect of the Hykanatoi caste of the Custodian Guard during the Great Crusade and Horus Heresy.[1]

Falling under the command of Tribune Ra Endymion, during the War Within the Webway Diocletian was charged with organizing a fresh wave of Imperial forces to resist the Chaos forces in the Webway including the condemned prisoners of House Vyridion. During the final battle for the portal Diocletian fought alongside both Ra and the Emperor himself, eventually managing to evacuate the Webway and make it back to Terra. After the battle the Emperor began showing visions of the past to Diocletian much as he had done with Ra, indicating that he may have become the new Custodes Tribune following Ra's disappearance into the Webway.[1]

He was noted for being one of the few Custodes capable of dreaming and they were reverently written to script. These scripts were then buried in the deepest vaults of the Imperial Palace's Inner Palace, along with the recorded dreams of other Custodes[2a]. Later on in his career, Diocletian wrote a seminal work dubbed The Master of Mankind. The book was still read by the Custodes 10,000 years later.[2b]

The Hikanatoi were an elite Byzantine guard unit during the Middle Ages.