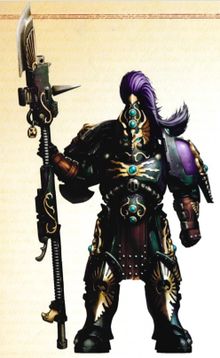 Diolos Remulak Akrodius was a member of the Custodian Guard during the Great Crusade and Horus Heresy, more precisely of the Vanek-Aeterna Sodality and the Dankanatoi.[1]

Originally a member of the Ephoroi, Akrodius was part of the Custodes force attached to the Blood Angels during the Signus Campaign. During the fighting, he was wounded as all of his brothers were slaughtered by Daemons during the defense of the Red Tear. In the aftermath of the battle, the wounded Custodian was kept ignorant of Imperium Secundus aboard the Red Tear. Upon returning to Terra he finally learned of what had transpired in Ultramar and was determined not to rest until every last hint of treachery was expunged from the Imperium.[1]

Akrodius would go on to be the first representative of a newly founded chamber of the Custodes active during the final years of the Heresy, the Dankanatoi.[1]