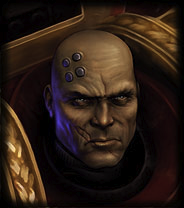 Apollo Diomedes is the Captain of the Blood Ravens Honour Guard. Previously, he commanded the First Company for almost two centuries.[1]

Diomedes's most famous victory came on the ravaged penal world of Obscurus. On the same day, he and his brothers defeated the Ork Warboss Manstompa Megakilla and the Chaos Sorcerer Anuphans the Cruel. After that victory Diomedes was elevated to the command of the Chapter Master's own honor guard, becoming Azariah Kyras's most public agent among the Chapter's far-flung battle brothers.[1]

Although not corrupted himself, he, acting under orders from Master Kyras, aided the heretical Apothecary Galan in opposing the efforts of Force Commander Aramus, who had been declared a renegade, to destroy Galan's Stronghold.[1]

He returned, 10 years later, to discover the truth with Cyrus and Martellus.