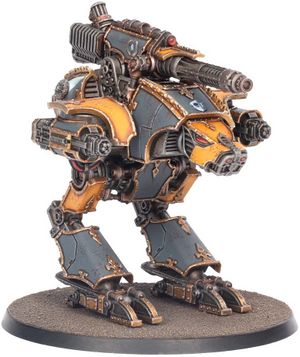 The Dire Wolf Heavy Scout Titan is a variation of the Warhound Scout Titan, that wields more powerful firepower and which is known for being highly effective at ambushes.[1]

The Titan sports twin Ardex Defensor Mega-bolters and comes with two carapace weapon options - the armor-busting Neutron Laser and the Volcano Cannon. The Dire Wolf has also been modified with flatter feet and more armor plating, to better stabilize itself for the Titan's heavier payload. Likewise, its void shield generators have been moved, from their usual location on a Warhound, to better accommodate the Dire Wolf's larger weapons.[1]

The Dire Wolf is known to be favoured by the Traitor Titan Legion Legio Audax.[1]