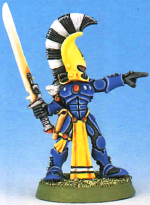 A Dire Avenger Exarch with a Diresword.

A Diresword is a type of Eldar Power Weapon wielded by Exarchs of the Dire Avengers Aspect Shrine. The weapon is unique, by way of that a potent Eldar spirit is contained within the blade[1a] (or according to another source - within a hilt[3]) itself in the form of a Spirit Stone. When a blow is struck with the blade, the spirit will attempt to destroy the enemy's inner mind, killing them instantly.[1a][2a] All Direswords are modeled after the legendary Sword of Asur, the first of its kind, carried by the first Phoenix Lord; Asurmen. The spirit contained within it is Asurmen's deceased brother Tethesis, allowing him to continue the fight against the Great Enemy of their people.[1b][2b]