From Warhammer 40k - Lexicanum
(Redirected from Disc of Tzeentch)
Jump to: navigation, search 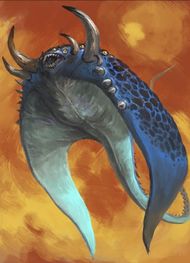 A Screamer of Tzeentch

Screamers, often referred to as Sky-sharks, are the Daemonic Beasts of Tzeentch. They soar through the warp in groups in search for souls.[5]

Screamers are very agile due to their ability of flight and possess a feral but cunning intellect. Though they are able to use magic-based attacks, their greatest weapons are their so-called Warp Jaws which allow them to chew through all kinds of solid matter, even the armoured hide of a space ship. In a direct confrontation there are few that can withstand their jaws or outrun their wings.[5] In their wake Screamers leave trails of multi-colored light, and all around them echo the mind-penetrating shrieks that give them their name.[4b]

Large packs of Screamers can often be found outside the realm of Tzeentch where they hunt after ships that traverse the Warp. Like all Daemons the only real burden they have to face with man-made vehicles are the Gellar Fields, which they systematically probe for weak spots.[5] In some cases, Screamers really manage to bite through the Geller Field and attack defenseless people inside the ship devouring souls in their last terrified moments of existence.[4b]

If summoned by Sorcerers, the Screamers, appear in the real world, completely ignoring the laws of gravity, atmospheric conditions and other properties, continuing to soar as if they were in their own realms of the warp. They fly over the battlefield, whipping opponents with their tails and impaling them on their brutal barbs.[4b]

Screamers that are chosen to serve as mounts for a Champion of Tzeentch are bound in magnificent bands and blades and turned into Discs of Tzeentch.[5] These flying Daemonic Steeds are tied to the will of their masters, combining great mobility and calculated thinking.[4a] Discs of Tzeentch display an infinite variety of colour and form[3], some of them surge forward by bending the dimensions of realspace, whereas others emit jets of warpflame from maws on their underside.[4a]