Dolumar IV is a Dead World, formerly of the Imperium.[1g]

Dolumar IV was a heavily Industrialized World, whose factories supplied its subsector with armaments and given time would have become a Forge World.[1a] So important were Dolumar IV's factories, that the Adeptus Mechanicus had constructed the Imperial Titan Imperio Prince-Nebulae Draconis there to defend it.[1b]

Dolumar IV was colonized by the Imperium with a small colony during the Age of Apostasy, but would soon loose contact with the colony, leaving the world a forgotten backwater. This would change sometime later, when a vast Chaos warhost darkened the world's sky and landed on Dolumar IV, after having destroyed numerous worlds across the Eastern Fringes of the Ultima Segmentum. The warhost destroyed the entire defenseless colony in minutes and began building a large temple dedicated to the Ruinous Powers. When it was completed, the warhost gathered there and summoned the Lord of Change Tarkh'ax, who would begin to lead them on a new Black Crusade to strike at Holy Terra. It would be all for naught however, as after the summoning an Eldar strikeforce, led by Farseer Jur Telissa, suddenly attacked and sealed the warhost in a prison; located in a cut off path of the Webway.[1c]

Tarkh'ax and the warhost remained imprisoned for millennia, during which time Dolumar IV was recolonized and would eventually become an Industrial World, until Magos Explorator Carneg found the temple's location while conducting a survey on the world. Carneg brought news of the temple's discovery to Dolumar IV's Planetary Governor, Meyloch Severus, who visited the temple[1c] and soon became enthralled by Tarkh'ax; who whispered into his mind and filled Severus with visions of the power he could gain from the Daemon, if it was freed from its prison.[1d] Shortly afterward, Severus began Dolumar IV's path to damnation by having Carneg killed, to keep the temple's discovery a secret and began his decades long quest to free Tarkh'ax. This culminated with Severus having the Ethereal Ko'vash captured from the nearby Tau Sept World Kuu'lan, which brought the Tau Empire into conflict with the Imperium. The ensuing battle between the Imperium's forces on Dolumar IV, the Battlefleet Ultima Primus and the Tau forces sent to rescue Ko'vash provided Severus with the necessary spilled blood and lost lives he needed to free the warhost.[1c] 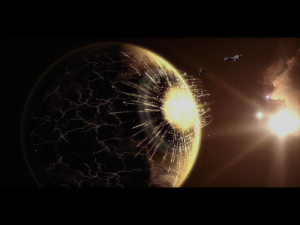 During the battle, Battlefleet Ultima Primus found itself weakened and outnumbered, when Tau reinforcements arrived and were soon forced to open diplomatic talks with the Xenos. The talks were conducted aboard the Battlefleet's flagship the Enduring Blade, but didn't get far before Severus decided to strike. With the power he long craved nearly in his hands, Severus completed a Chaos ritual which weakened the warhost's prison enough to allow all of them to break free, save for Tarkh'ax itself. What happened next was a disaster for the Imperium and Tau forces, as the warhost wreaked havoc on the doomed Enduring Blade and Severus entered a portal[1e] that delivered him to the Chaos temple, the warhost had created on Dolumar IV's surface millennia ago. There he began the final steps necessary to free Tarkh'ax[1c], while the warhost invaded Dolumar IV and began attacking its population. The Battlefleet and Tau would recover quickly and after destroying the compromised Enduring Blade, deployed their forces to Dolumar IV to stop the Chaos plot.[1f] After a hard fought battle, they succeeded and Severus was killed and the Lord of Change Tarkh'ax, was banished back to the Warp. Afterwards the Battlefleet and the Tau would part peacefully, as the Battlefleet began to launch an Exterminatus on Dolumar IV, which had become too corrupted to save.[1g]

It is known that Vulture Gunships of the 81st Imperial Navy Tactical Wing fought with the Tau on the planet.[3]