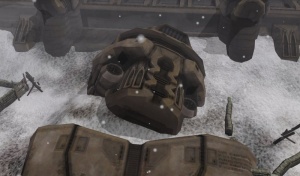 The Dominatus is an Imperator Titan that fell in battle against the forces of Chaos during the Imperium's failed defense of the planet Lorn V.

When Lorn V was attacked by the forces of Chaos' during the Horus Heresy, the Dominatus defended the Imperial world, but fell during the battle. The Titan lay broken and forgotten for millennia[1a] until the Imperium sent the Cadian 412th Imperial Guard Regiment, led by General Sturnn, to retrieve it[1b]. With the aid of Farseer Taldeer and her forces, who had their own goal to achieve[1c], General Sturnn's Guardsmen fought their way through both the Chaos Lord Crull's Blood Legion of Khorne warband and the Orks of Warboss Gorgutz 'Ead 'Unter, to reach the gate blocking the final resting place of the Titan[1d]. There the Eldar would betray the Imperial Guard, letting the gate close behind them and slowing down the Imperials. The Eldar reached the Dominatus first and used it to recharge a powerful Soulstone, when the Soulstone proved to be inadequate means to fight their ancient enemies the Necrons, who had begain to emerge from beneath Lorn V's surface.[1e]

The 412th managed to bypass the gate and set up an base of operations near the top of the fallen Titan, with Sturnn ordering the 3rd phalanx to set up defensive positions around critical locations of the Titan. Despite her betrayal Taldeer convinced General Sturnn to aid them in fighting the Necrons. The Imperials fired the Dominatus' weapons repeatedly into the Necron's advancing Monoliths - defeating the Necrons. Unfortunately, the Dominatus' long neglected systems could not handle the strain of recharging the Eldar's soulstone, as well as firing its weapons, and it's power core overloaded. The Dominatus's internals started to explode, the Titan's lights once again fading, and the machine became dormant once again.[1e] General Sturnn and the 412th were then gunned down by the Eldar troops, before the Eldar fled into the Webway. What few survivors of the Regiment made it off world spread word of the Farseer's treachery and to this day, the 412th's banner bears a black ribbon to mark their failure in recovering the Dominatus.[2] While the Titan was not fully destroyed, the damage sustained by the destruction of its power core and the defeat of the troops sent to secure it resulted in the Titan once again being declared "lost" to the Imperium.[1e][2]