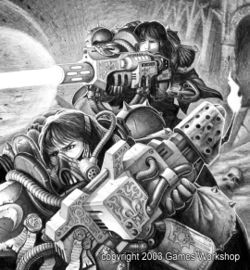 A duo of Dominions purging with flamer and melta

Dominions are Sisters of Battle who are trained to use specialist close-range weaponry such as Flamers, Storm Bolters and Meltaguns.

Each Adepta Sororitas Order maintains several units of Dominions.[1] They are among their Orders' most aggressive warriors, driven by the need to destroy the Emperor's foes. Though their training has tampered the worst of their impetuosity, Dominions still yearn to fight at the forefront of any Sororitas attack. As such they are often the vanguard of Sororitas assaults, breaking through enemy frontlines and destroying heavily defended fortifications. To this end they are often trained as demolition experts as well and carry Plasma Grenades and Melta Bombs into battle.[2] Dominions are known to be courageous and aggressive, but are also not impetuous. Under the watchful eyes of their Sister Superior, these squads temper their desire to bring the wrath of the Emperor to bear with a keen awareness of localized strategic conditions. They swiftly appraise their enemies and then pick out and eliminate each priority target in turn. It is this skill along with their specialist training in arming and maintenance rituals required to harness the Machine Spirits of their special-issue weapons that makes the Dominions so deadly in a firefight.[5]

Dominions typically ride into battle in a Rhino armored personnel carrier and are deployed to clear objectives as opposed to holding ground.[3] When an enemy has been eliminated, the Sisters will then move to the next location to deliver overwhelming firepower, leaving the Battle Sisters at their backs to secure the ground. Their tactics echo the ancient doctrine of the Daughters of the Emperor known as the 'Undeniable Word'.[5]