The Doom Eagles Chapter are a Second Founding Chapter of the Ultramarines. Based on the planet Gathis II, they are a notoriously pious, grim and aloof chapter.[1] 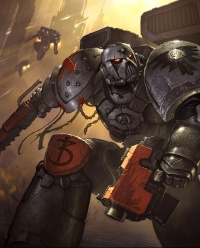 All of creation suffers, young ones. Only in accepting our own mortality can we make a difference. Only in bearing the burden of our failures can we find the strength to go on. Only in detachment from glory, or honour, or jealousy... from life itself can we hope to spare others from grief.[2]

We are Doom Eagles. And we are dead already.

The Doom Eagles are descended from the Ultramarines Legion, having been split during the Second Founding and led by their first Chapter Master Tulian Aquila after the Horus Heresy.[5] Counting themselves amongst the Primogenitors, the Doom Eagles follow many of the traditions of the Ultramarines themselves. However, in some ways, the Doom Eagles are very different to the other chapters of Guilliman's legacy. While the Ultramarines are of regal bearing, each a shining example of Space Marine ideals, the Doom Eagles are overtly morbid, their teachings focused on death and mourning. The central tenet of the Chapter's traditions is the acceptance that each and every Battle-Brother is already dying. Outwardly they appear consumed by grief at the approach of their doom, but as Space Marines they are immune to detrimental effects of such thoughts. The Doom Eagles suffer their morbid nature with stoicism and dignity, channelling it into a weapon of war through their Chapter's rites, culture, and traditions and by holding the belief that death is inevitable and that they are indeed slowly dying themselves, they find themselves free of any inhibitions and doubts which one such as them, a Space Marine, may still grasp.[3] During the trials of selection, those few hopefuls who survive will only be chosen if they have conquered and accepted death during the trials, otherwise they will be left behind to perish in the face of the elements.[2][3]

Since the formation of the Great Rift and the return of Roboute Guilliman, they have become one of the 10 Shield Chapters of Ultramar.[11]

The Doom Eagles are organised as a Codex Chapter, following the dictates of their Primarch, yet focus heavily on the use of Assault Marines. With a focus on such tactics, the Doom Eagles veterans are regarded to be amongst the finest practitioners of the jump assault in the ranks of the Adeptus Astartes, however members of the Blood Angels and the Raven Guard Chapters may disagree.[3]

Modelled upon the Council of Terra, the Chapter Master of the Doom Eagles can convene his Company Captains, senior Chaplain, Apothecary, Forge Master and Librarian in order to garner their views upon issues concerning the Chapter.[5]

This is a museum revering tragic events with pieces from the battles upon Armageddon, Rocene, Malvolion, Telemachus, Brodra-kul and others elsewhere with the artefacts arranged around the perimeter with the centre containing masonry from the Imperial Palace, a feather of Sanguinius and a shard from the battle armour of the Emperor himself.[5]

Hall of the Fallen

Above the Reclusiam are great slabs of obsidian arranged with the name of the honoured dead laser-etched onto its surface and with an artefact of the dead, such as a bullet casing, an eye-lens, shard of armour or an honour chain, encased in the panel alongside it.[5] 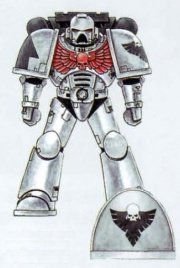