The Doom Legion is a Space Marine Chapter of Ultramarines descent. A majority of the Chapter was corrupted into the Chaos Space Marine warband known as the Vectors of Pox during the Abyssal Crusade in M37.[4]

The Doom Legion was responsible for maintenance and garrison of the Faithful's Deliverance, the pre-Heresy star fortress that overlooks the notorious Elusian Maze asteroid fields. Few other Space Marine Chapters could boast space-borne firepower of this magnitude.[2a] The Chapter's homeworld is the artificial planet of Elusia Prime.[2b] Over time, the Doom Legion was all but forgotten by the rest of the Imperium, left in that distant outpost, fighting endless wars against the denizens of the accursed sector.[4] 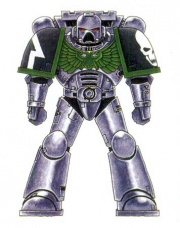 The Doom Legion was one of the thirty Chapters sentenced to the Abyssal Crusade. Because of their duty of watching over the Elusian Maze, only six companies took part in the Crusade, instead of the entire Chapter. Five of these were corrupted into the Vectors of Pox warband. After the crusade, the Inquisition subjected the Doom Legion to rigorous examinations to seek for corruption, though found none.[4]

However, the Vectors of Pox actually contacted their former brethren, attempting to convince them to also reject the Imperium. Despite the corruption of the majority of their Chapter, the remainder of the Chapter remained firmly loyal; including the Chapter Master at that time, Lord Konstantos. They killed the Vectors of Pox emissary.[4]

The Doom Legion have appeared to have rebuilt their Chapter, as of 998.M41 the Doom Legion 4th Company is known to be operating in the Ultima Segmentum, quelling an uprising on Neo Khartoum.[2a]

During the 13th Black Crusade, the Doom Legion and Fire Lords came to the aid of the 4th Cadian army on the besieged Fortress World of Kasr Sonnen. Despite this, Imperial projections showed the defenders would be overwhelmed by the attacking Alpha Legion forces in 2-3 days without further reinforcements.[5]