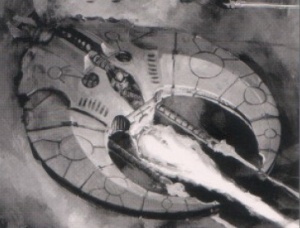 Doom Scythes are supersonic fighter aircraft used by the Necrons.

Unlike most of the forces employed by the Necrons, Doom Scythes can function in a highly independent manner and contain an advanced android brain as a pilot which is capable of simulating billions of possible strategies in the span of a few nanoseconds, making them formidable dogfighters.[1]

Doom Scythes are usually the first wave of a Necron invasion, used for sowing terror and confusion among enemy forces. Its propulsion system is a repulsor drive whose whine is capable of driving those who hear it insane and catatonic. Should the enemy not yield before this, they are armed with twin-linked Tesla Destructors and the devastating Death ray.[1]