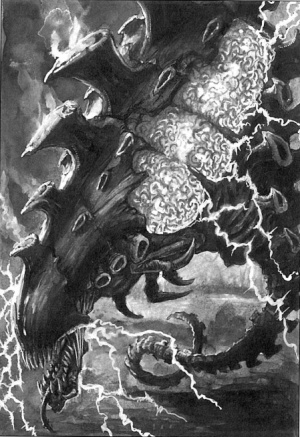 The Doom of Malan'tai is a uniquely adapted Tyranid Zoanthrope that has the ability to feed not upon flesh and blood but upon the psychic energy and souls of its victims. It has a large, spine-like growth emerging from its back and extending over its skull to resemble a hood, and also several rib-like claws protruding from its flanks. These alterations crackle with psychic energy and serve to focus its psychic powers so it can absorb the life-energy of all those around it.[1]

The creature took its name from the events on the Eldar Craftworld of Malan'tai. Following the destruction of Hive Fleet Naga by the Eldar, a lone and wounded Bio-ship committed its final act by launching its last bundle of Mycetic Spores into the Craftworld of Malan'tai. The Eldar of the assaulted Craftworld quickly set about hunting the scattered creatures, but in the process of killing those they believed posed the greatest threat they ignored a unique vampiric Zoanthrope that, left undisturbed, devoured the spirits of the Craftworld's Infinity Circuit. As it fed, its power grew, until it reached a nigh invulnerable level and went on to reduce the entire Craftworld to a lifeless shell. But since the destruction of the Malan'tai Craftworld, there has been no new sign of the creature now known as the "Doom of Malan'tai".[1]