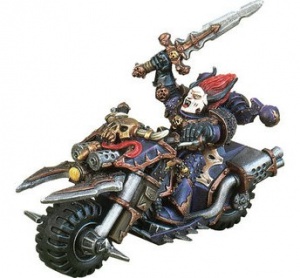 Doomrider's origins are largely a mystery. It is known that he was once a Chaos Space Marine, but anything beyond that is uncertain. According to some, he was once a member of the Emperor's Children Legion, and lead their debauches during the Battle of Terra. According to other sources, he was a traitor from a different Chapter, who went renegade after the Great Scouring. He has many names and titles used by those cultists that pay homage to him including the Demon of Speed, the Wolf of the Exhaust and the King of the Road.[3]

His physical presence when manifested in the material universe is of an angelically beautiful Astartes warrior clad in baroque Power Armour, his body consumed from within by warpfire. Crowned with horns of onyx, his eyes are burning pits and his mouth is full of jagged fangs. The skin of his face shifts as it constantly regenerates over the damage the warpfire inflicts on his body, creating around him a miasma of exhaust fumes and the stink of burning flesh.[3]

Mounted on a Daemonically possessed bike adorned with deadly blades and spikes and described as part insect, part corpse and part bat - its flaming wheels leave trails of screaming warpfire in its wake.[3] Armed also with his cruel Daemon sword, Doomrider carves a bloody swathe across the battlefield as he mercilessly hunts his prey. He can be summoned by Chaos Cultists in foul rituals to aid the forces of Chaos in battle, however he is highly unpredictable in nature and seldom stays in the material universe for very long, often returning to the warp as suddenly as he appears.[1]

He has become a target of the White Scars Chapter, who have sent numerous Master of the Hunts after him. All failed, however, to bring his head back to Chogoris, instead returning empty-handed or having their own heads taken and mounted on his Daemonic bike.[3]

The latest Huntsman, Captain Kor'sarro Khan, vowed to finally take the Daemon's head. After evading Kor'sarro four previous times, Doomrider was tracked to the Imperium world of Shaka VI, which had been nearly overwhelmed by a Chaos Cult empowered by Doomrider. This did not matter to Kor'sarro, who led his brethren against the Cult to reach the Daemon. Though Doomrider would defeat Kor'sarro in the battle, the hunt finally ended when he attempted to drag Kor'sarro through a portal back into the Warp with him. In a rage Kor'sarro wrapped his hands around Doomrider's neck and ripped the Daemon Prince's head off, closing the portal before they reached it. To Kor'sarro's surprise, Doomrider still lived and his head began to squirm in his hands. Doomrider tried to speak, but the Master of the Hunt quickly crushed his jaw and then returned to his fellow White Scars on the battlefield. With the hunt at an end they returned to Chogoris, taking the still-living head of Doomrider with them.[3]

The Ordo Malleus has been able to translate part of the ritual used to summon Doomrider from the Immaterium.[2]

Let our enemies tremble in ruptured awe before his fearsome visage!

Grant them an exquisite death, crushed beneath the flaming wheels of his chromium steed!

Permit them the ecstasy of being slaughtered by Doomrider's throbbing Daemonsword and his pulsating gun of gushing plasma!

Bestow on them one fleeting moment of pleasure as they stare in wonder and orgasmic delight at one of your most divine creations before dying at his hand!

Oh great Lord Slaanesh, for these reasons and many others that tease and titillate our imaginations, we beseech you, send forth your servant, the Daemon Prince Doomrider!
Summoning Ritual[2]