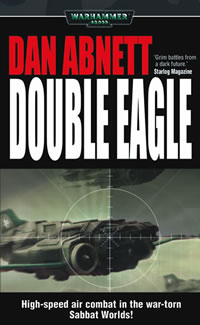 Double Eagle was written by Dan Abnett, and is a spin off from his popular Gaunts Ghosts series. It was first published as a hardback in 2004, and released as a softback in 2005.

While the Space Marines and Imperial Guard rule the battlefields of the Sabbat Worlds, the skies belong to the Imperial Navy. On Enothis, the enemy are threatening to halt the Imperial advance. Daemonic forces push into Imperial territory, thousands of refugees flee across the deserts and an infamous Chaos-tainted pilot, Khrel Kas Obarkon, rules the sky, his skill in the cockpit matched only by his kill tally. The ace pilots of the Phantine Twentieth Fighter Corps are the Imperium's only hope for victory.

The war between the Imperium and Chaos forces on the world of Enothis is going badly for the Imperials. The armies of the Imperial Guard defeated and retreating, the Enothian air force all but annihilated, the fate of the world rests squarely on the shoulders of the pilots of the Imperial Navy and one very special Guard unit.

The Phantine Air Corps, the only dedicated aviator unit in the Imperial Guard, find themselves in the thick of the fighting. Most of their number are the veterans of the Phantine liberation such as Bree Jagdea, commander of Umbra Flight, and the fatalistic Oskar Viltry, a Marauder pilot who believes he already should have died twice over. There are also some new recruits in their ranks just waiting to prove themselves in combat, such as Vander Marquall, who desperately wants to become an Ace.

Allied with the Imperial forces, the remnants of the Enothian air force don't seem to be able to offer much. However, perhaps men like the wounded veteran August Kaminsky and the raw cadet Enric Darrow can still make their contribution to the war effort.

The odds are stacked against them however, as seemingly endless waves of heretic fliers test the Enothian defences, and a Chaos Ace Khrel Kas Obarkon, is seemingly picking off Imperial pilots with impunity.

And whilst the aerial combat blazes overhead, embattled tanker Robart LeGuin of the 8th Pardus Armoured is just trying to get his men, and his tank, safely back to friendly lines.