Drach'nyen, the End of Empires and the Echo of the First Murder, is an ancient daemon of pure, unadulterated malice currently bound in the daemon sword of the same name wielded by Abaddon the Despoiler.[2] 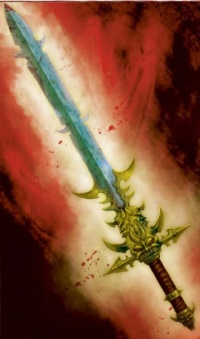 Drach'nyen can take many forms, and it only appears as a great blade in the hands of Abaddon because that is how the Warmaster chooses it to be. In truth, the sword has no real shape or size, at least nothing that could be understood by the mind of man.[3]

The weapon normally appears to be something akin to a two-handed sword, except that Abaddon wields the weapon with a single hand in conjunction with the Talon of Horus. The guard of the weapon tends to be golden in colour, with a leering face of a demon just above the handle. The ricasso of the weapon has spikes protruding from the sides as well as outward from the blade, and the blade itself is blue with red, tormented faces (the faces of souls it has devoured since being claimed by Abaddon[5]) writhing across its surface.[1]

The origins of Drach'nyen are a mystery to most, unknown perhaps even to Abaddon himself. Daemons speak of the blade in fear, calling it the Thorn in Reality or the Shard of Madness. It is, however, known to be a weapon that has existed long before the rise of Mankind.[3]

Drach'nyen was born at the moment of the first murder - the first time a human killed another human outside of the need to survive. The name Drach'nyen, which can be translated as the End of Empires[4b], is an approximation of the scream of the first murderer and that of the brother he murdered.[4a]

During the Horus Heresy, Drach'nyen entered the human portion of the webway. The Emperor of Mankind was able to sense its presence, and knew it was the daemon born of the first murder.[4b] Shortly after its arrival, the daemonic forces were able to overwhelm the Imperial forces at Calastar, forcing them to retreat to the Imperial Palace. In order to cover the retreat, the Emperor left the Golden Throne to confront Drach'nyen. The daemon took the form of a Stone Epoch war-chief, impaling the Emperor and claiming it would be His death. The Emperor ripped the daemon, now in the form of the daemon sword, from His body and hurled it at the Custodian Ra Endymion, impaling him and binding it within him. As the last Imperial forces retreated from the webway, He order Ra to run.[4c]

At some point, Drach'nyen was bound in the labyrinth beneath the Tower of Silence on Uralan, where the Chaos Gods themselves lock away their secrets. Abaddon was led to the Tower of Silence during his 1st Black Crusade in 781.M31 and, after fighting off constructs of dark energy that served as the tower's guardians, entered the mirrored heart of Uralan beneath the crypts. Wandering a haunted labyrinth of impossible angles that was continuously made and unmade as he walked, Abaddon encountered a towering figure wreathed in golden light. The golden figure led him to the centre of the labyrinth, where a shard of shifting darkness hung. When Abaddon grasped it, Drach'nyen took on the form of a fearsome blade.[3]

After that, Drach'nyen served Abaddon well. With it Abaddon hewed open the gates of the Kromarch's citadel, disrupting the nullification fields with which they were reinforcing the fabric of realspace. Another famous story tells about the impaling of the Great Technomandrite of Danth, thus sealing the fate of the anti-empyric Lemuel Cluster.[6] 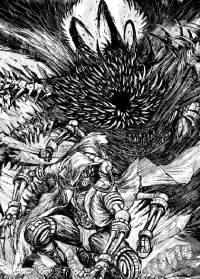 Drach'nyen in its original form during the Horus Heresy