A Dracon is the commander for a regiment of soldiers in a Dark Eldar Kabal.[1] They are frequently seen leading their forces in large-scale raids, or joining up with a raid currently in progress upon receiving word that considerable resistance has been met.

Dracon equipment is very similar to that used by Archons, with slight exceptions.[Needs Citation]

Dracons usually dress very similarly to an Archon (although they are careful not to outdo them), wearing light, pressurized, neuroresponsive armor that has been customized with talismans, trophies, and ornate modifications in order to distinguish themselves and emphasize the importance of their rank to subordinates. In fact, most other races have difficulty telling Archons and Dracons apart because of this. To make this mistake in the presence of an Archon or Dracon, however, is to almost guarantee one's own death, and perhaps even the Dracon in question depending on circumstances.[Needs Citation]

By the time a member of a Kabal has achieved the rank of Dracon, they more than likely have attained access to the full armory of the Kabal, and as such are frequently seen equipped with the same incredibly advanced wargear, or ancient and valuable artifacts. In the event of a full-scale operation, one that would include the Archon in battle, Dracon's obviously must allow their lord first choice on any equipment they might want.[Needs Citation]

It is quite common for a Dracon to have a specific Warrior retinue squad that they take on as their retinue, but these warriors are less like bodyguards, and more like disciples, blessed with being given the opportunity to train under a being of such distinction and skill as to achieve the rank of Dracon. This Warrior squad is usually given a special name, and is treated with increased kindness by their Dracon, while suffering increased contempt by their fellow Warriors. These elites usually swear fealty to the Dracon over the Kabal, and as such are often the fulcrum necessary for a successful coup d'etat. Unfortunately, this means in the event of the Dracon's plot being foiled, these elites are usually killed or enslaved regardless of whether they had anything to do with the matter.[1] 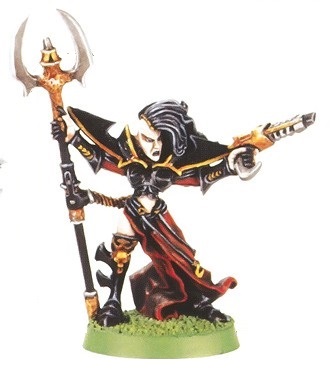