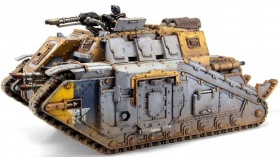 The Dracosan Armoured Transport was an armoured personnel carrier used by the Imperial Army during the Great Crusade and Horus Heresy. The Dracosan Armoured Transport was manufactured to standards only usually required of war machines destined for service with the Legiones Astartes. It was large enough to accommodate twenty troops, and heavily armoured enough to protect them from intense enemy fire. Its protection was greater than the ubiquitous Rhino.[2]

Equipped with a fearsome array of weapons of its own, including either a powerful twin-linked lascannon or a mighty demolisher cannon at the expense of some of its transport capacity, the Dracosan could steadfastly defend itself against enemy counter-attack and pound an adversary’s emplacements to dust before those on board disembarked to storm enemy positions.[1]

A cargo transport variant of the Dracosan is known as the Brontosan.[3]