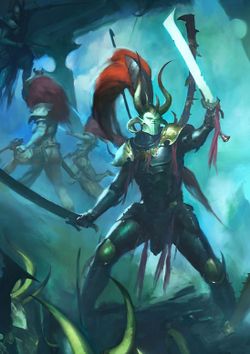 Drazhar is the most infamous of the Incubi. His position in the Incubus sect is Executioner as he is the champion of his order.

Drazhar was first encountered at the gates of the Great Shrine of the Incubi[3a] in Commorragh. He walked straight into the shrine, cutting his way through any guards who tried to stop him. When he reached the inner sanctum, Drazhar challenged the enthroned Hierarch of the Shrine. The Hierarch stepped down from his throne into the duelling circle with Drazhar and took up a battle stance. The Hierarch's self-assured superiority soon evaporated when his challenger blurred into action. The duel took only a couple of minutes until it ended with Drazhar stepping over the Hierarch's dead body before making a small bow. He has since taken up the mantle of the Incubi's sacred executioner.[3a]

No one knows Drazhar's true identity. There are no records of him in any Incubus shrines and no one had heard of him before he walked in to the Great Shrine. Even the name Drazhar is ceremonial, meaning Living Sword.[3a]

Drazhar has since fallen under the employ of Asdrubael Vect, who has put a bounty on the head of Yvraine, prophet of the Ynnari. During the Raid on Saim-Hann, he nearly slew Yvraine but was denied his prize by Jain Zar who allowed the prophet to escape.[3b]

After that Drazhar retreated through the Webway Portal and then managed to trap his pursuers - Jain Zar and her Howling Banshees, ambushing them in Shaa-Dom city, Aelindrach region where all of Aeldari were killed, Drazhar personally cut Jain Zar in two and then gave her armour to the dark and evil denizens of Aelindrach - Mandrakes for she never ever could reborn again. Sensing the death of a great Phoenix Lord and feeling guilt for it, Yvraine asked Ynnead to give Zar a new life. Upon learning that Jain Zar alive, Drazhar set off to the lost Craftworld of Zandros to fight and kill Jain Zar again. But he could not have foreseen that now Jain Zar was full of Ynnead energy of death, so in an epic fight, resembling the Battle on Zandros from previous times when Phoenix Lords Karandras and Arhra clashed in bloody battle, Drazhar was slain by Jan Zar.[4a] After the battle one of the Drukhari survivors, Klaivex Dara'kinia Thremense, found the armour and the mask of Drazhar and donned them, losing herself right after that. It may or may not mean that Drazhar is also one of the Phoenix Lords and hence was reborn.[4b]

After Drazhar had invaded the Great Shrine of the Incubi[3a] and killed its Hierarch, gossip and rumors started to spread. Some say Drazhar is the Fallen Phoenix, Arhra, and that Drazhar's armour is filled with nothing but bone-dust.[3b] It is said that there is no challenger equal to Drazhar. All who challenged him have fallen under his blades. Yet Drazhar has shown no inclination to take up the position of Hierarch or even Klaivex. He is the Executioner, and exists only to kill; nothing more, nothing less.[Needs Citation]

Drazhar is one of the very few denizens of Commorragh who is widely admired. His deeds are often spoken about, particularly among those who managed to secure his services on a realspace raid. It is said he single-handily dispatched a trio of Custodian Guards in close quarters and was able to out-match Jain Zar in sword ability.[3a]

Taller and more lithe than other Incubi, Drazhar is fast as lightning. He wears an ancient Incubus Warsuit, perhaps even the original Warsuit, which is significantly tougher than those worn by others of the sect. Drazhar uses demiklaives or disemboweller blades[3b] which can also be used by deadly Klaivex Incubi leaders.[3с]