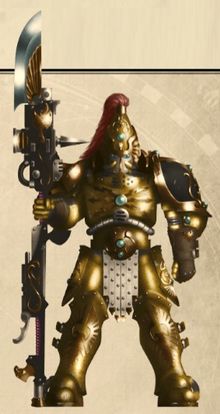 The Dread Host is a Shield Company within the Adeptus Custodes, also known as the Instrument of the Emperor's Wrath.[1a]

The Dread Host's main purpose is to deliver the Emperor's divine wrath on the most visible and dramatic threats to the Segmentum Solar. Numbering in the hundreds and organised into multiple shield hosts, their Shield-Captains determine what foes they face and, once given a target, the Dread Host is transported aboard a trio of pre-Heresy warships known as the Moiraides. Such is the military might of the Dread Host, that in only a handful of times in the entire history of the Imperium have all three of the Moiraides loosed their passengers against a single foe.[1a]

Once the Dread Host is sent into battle, they will not stop until their foes are completely destroyed and will unleash such overwhelming annihilation with their weaponry that it sends shock waves rolling through the Warp itself. In their long history of service the Dread Host have faced foes that have vastly outnumbered them, but by using their superior strategy, speed and strength, they have smashed Ork Waaaghs!, obliterated rebellious star systems and crushed traitor crusades. With every campaign, the group spreads the terror of the Emperor’s wrath and the breathtaking bloodshed and absolute destruction the Dread Host leave in their wake has dissuaded hundreds of uprisings and invasions before they could even begin.[1a]

The stronghold of the Dread Host is an area of the Imperial Palace known as the Sanctum of a Thousand Eyes. This armored bastion is lit with electro-braziers and lumens of immense size, all angled to under-light the five hundred enormous eagle statues that line the sanctum's upper battlements, each as large as a Super Heavy Tank. Legend says that these structures can perceive disloyalty in any they gaze upon. To some extent this is true, for the eagles contains a complex array of augurs, servitor cognition banks, and multi-spectral listening devices.[1a]