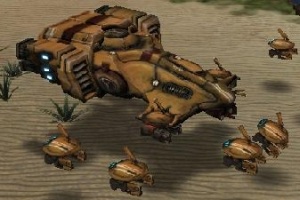 The Drone Harbinger was a variant of the Tau Empire's Hammerhead gunship which was armed with only twin Pulse Carbines.

Whilst weakily armed, the Harbinger actually had the advantage in that its internal structure served as a factory in the production of Gun Drones. These cheaply produced weapons of war are capable of slowly overwhelming an enemy in their massed firepower.