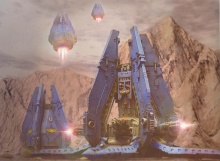 Adeptus Astartes have used Drop Pods since the time of the Great Crusade.[1] The Drop Pods of the Adeptus Astartes look and work similarly to a ship's Life Pod and can carry either twelve normal Marines, a single Dreadnought or a single Thunderfire Cannon.[4] They are launched from a Strike Cruiser or Battle Barge[1] in low orbit towards the drop zone, usually amidst or near a battlefield.[3] Once launched, they plummet through the atmosphere until retro jets fire to slow their descent.[4] A machine spirit guides the pod to its destination and can receive further commands from the mother ship. Although the Pods become immobile after having landed they can be recovered by the Chapter's Techmarines and reused.[1][2a][6a] Drop Pods are usually extracted by using far larger vessels that not intended to operate in a war zone. After that they are transported to the ships that deployed them, repaired if needed and used in the next battle, so many Drop Pods have been in service for centuries. Some Space Marine Chapters inscribe records of each drop onto the interior bulkheads of their Drop Pods, so other brothers can read them and take heart in the insuing battles.[12]

Standard Drop-Pods are most frequently armed with an array of either Storm Bolters or Deathwind Missile Launchers.[4]

There are also cargo-carrying pods that deliver a much needed ammunition to fighting troops even in the heat of battle.[12]

A variant pattern of drop pod used in a similar manner to a Boarding Torpedo; corvus assault pods are used to assault other ships or Space Stations in the void.[14] 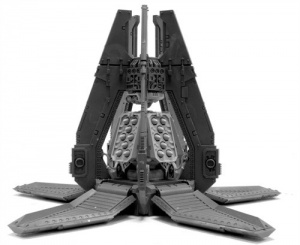 Deathstorm Drop Pods[7] (also known as Deathwind Drop Pods)[1] are a variant pattern that don't carry troops; instead they have weapon systems installed to rake the enemy with high levels of fire once they have landed and opened. They can be armed with either Whirlwind Launchers or Assault Cannons.[7]

The Kharybdis Assault Claw was a monstrous Drop Pod and transport craft used by the Legiones Astartes during the Great Crusade and Horus Heresy.[9]

Lucius Pattern Drop Pods are heavier and larger than the standard drop pods used by the Adeptus Astartes and possess a more powerful engine. While lacking many of the internal support systems and armament, it nonetheless allows a single Dreadnought to be deployed into the battle with minimal delay. The stresses involved in the drop however are such that only the heavily armored shell of a Dreadnought could hope to survive the impact without being pulverized. Lucius-Pattern Dreadnought Drop Pods are tithed directly to various Space Marine Chapters which have treaties with the Forge World of Lucius. These vehicles are prized due to the high attrition rate they suffer in battle.[8]

Support Drop Pods are similar in role to Deathwind Drop Pods, carrying automated weaponry instead of troops. Upon landing, the pod opens to a turret-mounted plasma cannon. Unlike the Deathwind it is however capable of sustained operation.[15]

The Dreadclaw is an ancient Drop Pod variant that can also be used as an assault boat for ship-to-ship combat. Unlike other Drop Pods it is able to take off after landing. Dreadclaws are exclusively used by Chaos Space Marines.[2b] [6b] 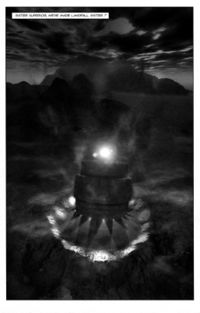 With the release of [7], the Deathwind Drop Pod (discontinued) from previous Forge World publications has officially been replaced with the Deathstorm pattern.