The Earth Caste (or Fio) is one of the five Castes of Tau Society, based around engineering, agriculture, industry, and construction.[1a]

This caste provides for the manufacturing, agricultural, industrial, artisans, and engineering needs of the Tau Empire. By far the largest caste in sheer numbers, it is they who erect dwellings, provide food, and produce new technology. Members of the Earth Caste are often described as plain and dour, possessing a rather stoic outlook on life in general. They were originally the first Tau to build cities and practice agriculture. The city of Fio'taun is an example of this, being the first place where the Ethereals appeared.[1a]

Most of the simple labor of the Earth Caste is done by Drones.[8] 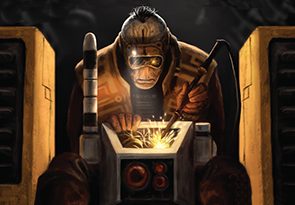 The Earth Caste ranks from lowest to highest are:[3]

Notable Members of the Earth Caste