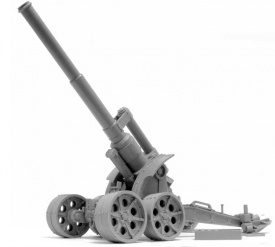 The Earthshaker Cannon is the standard artillery piece of the Imperial Guard.[1]

This 132mm calibre weapon has a muzzle velocity of 814 meters per second and fires a 38 kg projectile, hitting targets over 15 km away in under 19 seconds, using the standard five powder charge.[3]

Six and seven powder charges can be used to hit targets well beyond this range, however the additional wear and stress this causes on the barrel limits the number of overcharged rounds to twenty, with authorization for their use required. Only Earthshakers on static mounts can fire these charges, as vehicle mounts are considered too unstable for their use. The most common type of shell fired by Earthshakers are high explosive, but it can also launch incendiary, smoke, illumination, and even diamantine-tipped armour piercing shells.[2] Shells fired by Earthshakers have been known to cause craters fifteen meters in diameter and obliterate infantry in an instant.[5]

The Earthshaker is most often mounted on the Basilisk self-propelled artillery tank,[1] though it also appears in static artillery positions as well as built into fortifications.[2] It has also been observed in an anti-aircraft role.[7]